Barcelona-based Violetta, who goes by @yeswhatnails on Instagram, shared a quick video late last week with the caption, “Hypnotizing ??.” All it shows is a thumb moving around a little, but there has never been a more spellbinding thumb in the history of fingers. The nail is coated in dark blue polish with lighter-blue shimmer – but to just call it “shimmer” would be an understatement. As we see it from different angles, it truly looks like a multidimensional celestial event. 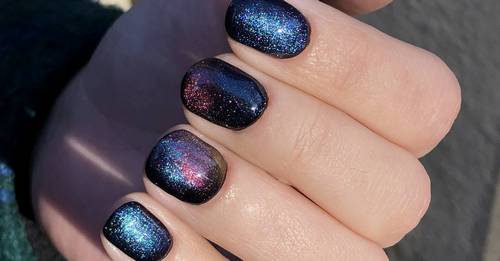 Remember in Men in Black when they realized there was an entire galaxy in a pendant on a cat’s collar, and how completely mesmerising that tiny galaxy was? Well, a nail artist in Spain has managed to capture a similarly galactic look on her nails, and Instagram is losing its collective mind over the effect.

As of writing this, the video has been liked by nearly 12,000 people and viewed more than 90,000 times (probably those 12,000 people watching several times because, as the caption says, it really is hypnotising). It also has more than 150 comments, full of exclamations like “Wow!” and admirers declaring how much they want a similar manicure. “I want some of that magic on my nails! ???,” one person wrote, while others begged Violetta to reveal what products and techniques she used to achieve the mesmerising results.

Turns out one of the reasons this polish is so magnetic is because it’s literally magnetic. Violetta sent us a still shot of the manicure (top) and said that she used a type of nail polish with an effect called “cat eye” – it’s characterised by its shimmering swirls – which is achieved with magnetic particles in the polish and a magnet tool that lets you manipulate the polish before it dries.

A number of professional gel-polish brands make it, but you can also get regular magnetic nail polish from brands like KB Shimmer – the duochome shade No Comet is a great option for creating your own galaxy nails at home. 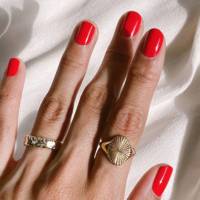 From tomato to poppy, these are the best red nail polishes to try 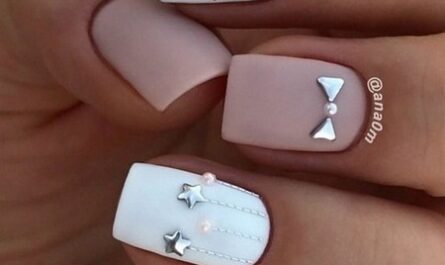