Welcome to 2020, a watershed year for pandemics and – dare we say it -the regression of feminism?

“I feel like a 1950s housewife,” said a friend of mine, a mother of three who, due to the nature of the following justifiable fury, would prefer to remain nameless; “In lockdown, despite the fact I still have a full-time job, I have also somehow found myself as a full-time homeschooler and a full-time parent.”

“During this pandemic, my husband and I are both WFH, but I am somehow the assumed caregiver, I am the one still feeding and cleaning the kids. My boss even assumes it. He asked me the other day if I needed to go part-time, despite the fact that I said nothing about struggling with work,” she says, “I can tell you this for certain- my husband’s boss wouldn’t dream of asking him the same thing.”

“ I think we have regressed into traditional roles and I think that happens in a crisis. Schools and nurseries have closed and so it has fallen once again for mothers to look after the children, so they are at home doing that,” says Joeli Brearley, the founder of pregnancy discrimination campaign group Pregnant, Then Screwed, “Many are unable to work, and it is barely mentioned in the government’s response that these millions of women who are now unable to do their jobs and are picking up all the invisible labour yet again.”

Ah, invisible labour. If you’re wondering what that is, you are probably a bloke. 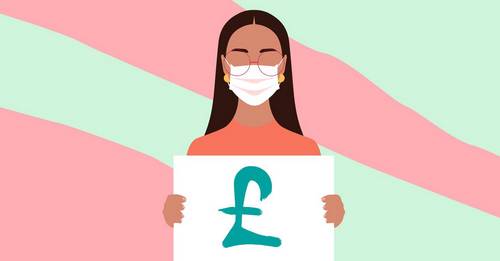 Invisible labour is the work that primarily women find themselves doing unpaid, alongside often actual full-time jobs. It’s the care of children, domestic chores, even the time it takes to organise social gatherings, write Christmas or Birthday cards to family friends, take care of elderly relatives. All these supposedly small jobs that amount to the framework of homelife are assumed to be the responsibility of women and it takes an exhaustive amount of time and energy from us.

Mandu Reid, the leader of the Women’s Equality Party, says the unpaid work done by women, brings an estimated £140billion to the UK economy. This assumption that these roles were somehow female existed long before Covid19. But the pandemic has shone a sharp and unforgiving light on it.

“There is no logical reason for this,” Reid says, “But what that does is it gives us a situation where women are more likely to work part-time, that when couples do have children, men do not take as much time off because we are still in a place where it is not financially viable or socially accepted. We are seeing that in such a dramatic way during Covid19.”

It has been a largely exploitative time for mothers and expectant mothers, adds Joeli Brearley. “We are seeing companies saying to mothers – well you can’t work at home, you’ve got children but they are letting male colleagues work at home- very clear sex discrimination is happening here,” she says. “Employees are also being really difficult with women who are pregnant- often furloughing them which has a huge effect on their maternity pay. There is massive bias against women who have children or who are pregnant.”

This will also have a huge effect on the gender pay gap. Before Covid19, it was at 17.3%. Not great, but strides were being made.

“We were moving in the right direction,” says Mandu, “but make no mistake- the gender pay gap was a serious problem before this crisis. It was one of the biggest emblems of inequality between men and women, and it was quite a big emblem, because it was not about the way people feel or about people’s attitudes. It is data that demonstrates that women and men, whatever their academic credentials and experiences; when you look at the data do not have equal pay prospects.”

The gender pay gap is almost certainly about to be blown wide open. This is the stark reality for women right now: the European Institute for Gender Equality estimates that a quarter of women across Europe are in jobs likely to be shut down by the pandemic. In the UK, part-time workers make up 40% of the female population, as opposed to just 13% of men. Our Institute for Fiscal studies shows that women were about a third more likely to be in these at-risk jobs.

A study by think tank Autonomy found that over one million of the jobs with the highest risk of Corona virus exposure pay poverty wages – which is scary enough- but then consider that a staggering 98% of workers in high risk jobs that are being paid poverty wages are women.

To mark this growing concern, the government’s Women and Equalities Committee has just launched an enquiry to see the true impact of Covid19 on women.

“In this country, 69% of low paid workers are women, 74% of part-time workers are women, 55% are in temporary employment,” says Mandu, “Those people are in the most vulnerable category right now. They are far more likely to lose their jobs completely when furloughing schemes end.”

“When furlough ends we fear that we will see a significant increase in female unemployment,” agrees Sam Smethers, CEO of the Fawcett Society. “And that means the gender pay gap is almost certainly going to widen. Both women and men are taking a hit in earnings but early research suggests that women’s pay is falling by a greater amount.”

“We have also seen gender pay gap reporting suspended,” she says, of the move made by the government to ease pressure on companies at this time; “We have to ensure that reporting requirements are reintroduced as soon as possible otherwise any progress we have made in recent years will be reversed.”

“We also know a lot of childcare businesses are going to go under,” says Mandu Reid, adding a bit more misery to our list; “An estimated 150,000 to 200,000 childcare spaces are going to disappear in the UK and that is going to have a huge knock-on effect for women. Because on top of these assumed structures already in place, it will be impossible for them to continue in their careers if they have no childcare.”

So, how do we find a bit of positivity at this time. Is there any?

“I believe this period will force a lot of women to hit reset on their careers, as they reassess priorities, financial standing and long term career fulfilment,” says Anna Jones, co-founder of the women’s member’s club AllBright, which has just launched AllBright Digital to help women upskill and future-proof their careers. “It is a brand new digital membership offering online training, coaching, networking and editorial content to career women to help combat this crisis. The response we’ve had so far has been incredible.”

Mandu Reid also believes that new generations of men will combat the gendered care assumptions that have so far held women back.

“The data is telling us that these younger men are more interested in playing a more active parenting role,” she says, “Which means we need to fight to get a strong enough parental leave system to allow men to play that role. We don’t have anything in place that makes it easy for them to do that, or that makes it financially viable for couples to split the parenting responsibilities equally right now. We should.”

That fight that Manu talks about, is also a reason to be inspired. Women have often fared well after global crises. Let’s not forget, taking on stereotypical male roles on the home front and abroad during WW1 got women the vote- as it highlighted the pivotal role women play in society.

What this pandemic has done, is much the same. We cannot escape the unjust gendered division of labour as it has been so exposed by this crisis. We cannot ignore the gender pay gap anymore, because the gender inequalities of our society are about to be magnified by this crisis, and will be shown in the data when the 2021 pay gap is reported.

“The issues that cause inequality between men and women should be front and centre. We shouldn’t have to wait our turn for these issues to become a priority,” Mandu says, “We need men by our sides and we need a groundswell. We need recognition that these issues matter. There is an appetite now to put right inequalities because people’s minds have been blown open by this crisis. This is our chance to build on that.”

We need to use this moment as a watershed one for women. So, ladies, fancy making the post corona world a fairer one for women? Who’s with me?

Is late-night snacking really bad for your health

Has lockdown turned us all from social butterflies to Zoom-dodging hermits?