«It’s not necessarily about one-upping myself to the next epic… because I think that’s probably a road to certain death at some point.» 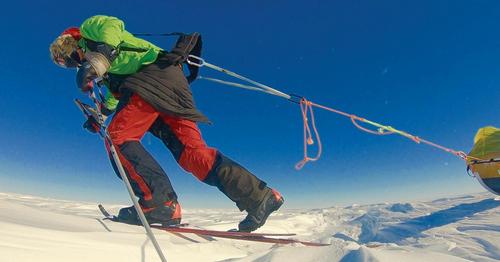 O’Brady had to drag a sled with everything he needed for his trek, requiring a scientific approach to planning, including logistics, diet and caloric usage.

On December 26th, 2018, Colin O’Brady became the first person to traverse Antarctica solo, completely unsupported and unaided. With no resupplies, he had to drag everything he needed for the journey, without so much as a kite to help pull his sled.

It was a Herculean task, 932 miles and 54 straight days of a grueling, torturous existence as straining on the mind as it was on the body. His trek culminated in a 77 mile, 32 hour “sprint” to the finish, making him a candidate for one of history’s all-time polar expedition achievements.

At its simplest, it was a journey from a very cold Point A to a very cold Point B. In a sense, it was a task as straightforward as can be described, but to look beneath the simplicity of it is to see the grueling preparation, the scientific approach to logistical and physical challenges, and the constant presence of disaster or even death, one’s constant potential companions on the ice sheets of Antarctica.

Colin O’Brady is an inspiring guy, to say the least. Maybe it’s his contagious positivity, or his sense of humor, or his optimism and happy-go-lucky demeanor. The undeniable truth is that O’Brady completes superhuman tasks, and he does them with less complaining, self-pity or cynicism than many of us succumb to in our mundane daily lives. 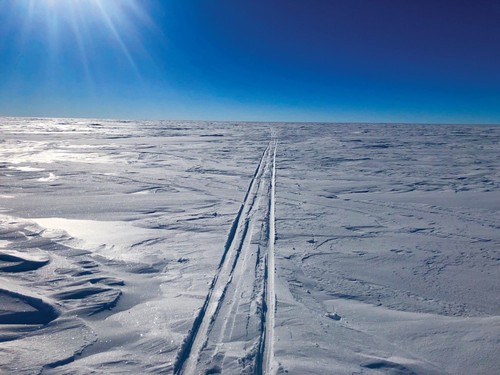 O’Brady’s trek was as difficult mentally as it was physically, as he faced a monotonous landscape day after day.

It’s impressive, it’s admirable, it’s definitely inspiring. But let’s be honest, it’s also infuriating. Speaking to Colin O’Brady is for most of us like looking into a fun
house mirror in which the image gazing back at us is the best version of ourselves. The version who has direction and purpose, the version who not only dreams big, but follows through on those dreams. The version who achieves great accomplishments personally, but with the ultimate goal of positively impacting the lives of others.

Perhaps it’s envy or jealousy; those would be natural reactions, but the unavoidable fact remains that you simply can’t dislike the man, or the manner in which he lives his life. It’s unapologetic but respectful, and purpose-driven but largely based on symbolic achievements with little obvious tangible benefit.

It’s also isolated and remote and disconnected from the world in a way few other lives can offer, but it’s done with the ultimate goal of connecting people. O’Brady seemingly lives a life full of contradictions, yet hearing him describe it, he’s achieved a balance that most of us can only aspire to reach.

Speaking  with Maxim, shortly after returning from his successful crossing of the southernmost continent, O’Brady’s energy and enthusiasm seem undiminished; if anything he seemed rejuvenated rather than recuperating when we spoke with him. 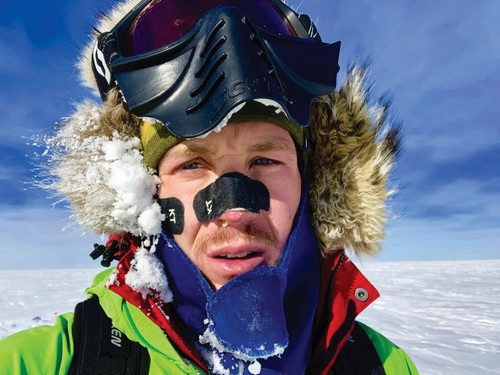 The elements took a huge toll on O’Brady, particularly affecting any skin unfortunate enough to be left exposed to the cold and wind.

“I grew up in Portland, Oregon, which of course is a great place for experiencing the outdoors,” he recounts. “I didn’t have a lot of money as a kid, but my parents would take us out camping, and biking, and hiking, and whatnot, out in the back country of the Pacific Northwest. I was recruited and swam at Yale University, which kind of kept me in sports for a long time.”

Like many twenty-somethings O’Brady decided to travel, and at a time when his tenure as an elite athlete was seemingly winding down, a disaster and near tragedy sparked the second phase of his life.

“I was severely burned in a fire while traveling in Thailand, which really changed my life dramatically. When I was in the Thai hospital, doctors told me that I would never walk again normally,” O’Brady recalls of those dark days of uncertainty.

But with his mother helping during his recovery, O’Brady set a crazy goal for a man who might never walk easily again: run a triathlon. Of course, O’Brady being who he is, 18 months later he was not only competing in the Chicago Triathlon but winning it, against top competition, none of whom had likely endured recovery from severe burns months prior. 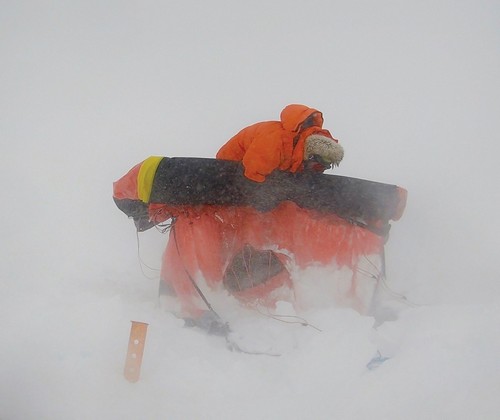 Setting up his tent was a potentially deadly challenge each day in the strong winds, as a lost tent would mean almost certain disaster, if not death.

“That kind of led me on the path I’ve been on the past decade, kind of culminating here in Antarctica, which was this curiosity of unlocking human potential, understanding, ‘Wow, if I did that, what else am I capable of?’, and more so, what else are we all as humans capable of when we really set our minds to things?’”

“So I quit my day job at that point, a finance job” – he has a degree in economics from Yale – “and ended up racing triathlon for the U.S. national team in 25 countries on six different continents over the next five or six years. Then really, [I] just started dreaming up these world record projects, this way of continuing to push my body to that next or extreme level. With these projects I decided, ‘Hey, what if we tell this story to the world in a way that inspires others to unlock their potential inside of them?’”

You see, it’s hard not to root for the guy. But his half-pep talk/half- inspirational speaker attitude can, simultaneously, almost seem simplistic if not downright naïve.

And that could be the case, if not for the way O’Brady always backs up his talk with his walk, even a walk across the least hospitable continent on the planet. And his focus on preparation, physical and logistical, is so scientific and thorough that one realizes that there is nothing naïve about O’Brady at all.

If anything, he knows the challenges, risks and consequences as well as anyone. His preparation involves adding as much weight as feasible to his frame before departure, as he inevitably lost weight over the 50-plus days of the trek, and could only drag a finite amount of weight (and thus calories) with him on the sled over rugged, uneven terrain.

Each calorie was accounted for, and O’Brady worked with a team of experts to design a system and diet that gave him a significant caloric advantage over previous expeditions attempting the crossing. He’s also a well-practiced student of meditation, even entering multi-day silent retreats, a skillset which comes in handy in the monotony of walking across a whited-out, endless wasteland.

Following in the traditions of adventuring heroes of his like Ernest Shackleton and Sir Edmund Hillary, O’Brady wanted to not only push the boundaries of human potential, but to obtain a first. Whether it’s a first ascent (O’Brady has summited Mt. Everest), a first traverse, or a first circumnavigation, there’s a core aspect of exploration that involves getting somewhere first. That’s what caused things to get tricky.

You see, at the same time that O’Brady was attempting to get bragging rights to the first solo, unaided and unsupported traverse of Antarctica, a badass British Army captain named Louis Rudd was attempting essentially an identical trek, even within a matter of days (or miles) of O’Brady throughout their trips.

Rudd was attempting the feat in honor of his friend Henry Worsley, who perished attempting the same crossing some three years earlier, making the stakes for O’Brady and Rudd even more clear. But rather than worry about the competition, O’Brady used it as motivation.

“Ultimately, both Lou and I were racing history, first and foremost. We were trying to be the first in history to do this.”

But Antarctica is the kind of place that decides the rules for any game or competition, making this solo expedition not quite as isolated as one might dream of during preparation.

“It just so happens, the way Antarctica works, there’s really limited logistics; there’s one guy who owns the one plane who can take you to a drop off point and there’s only one season or window where you can do it,” O’Brady explains.

“So it was no surprise that if someone else was going to attempt it, they’d be attempting it at literally the exact same time, side by side. It would’ve been great to be out there completely in my mind, when I was picturing the project, just completely solo without somebody else attempting it, but ultimately, I think it was motivating… to have that sort of visceral competition.”

As for the man he was racing, but rarely saw, O’Brady has nothing but admiration.

“Lou is someone who I have a great deal of respect for. He actually now has logged more miles in Antarctica hauling a sled than any other person alive because he’s done a lot of other really significant expeditions. He’s a British military guy who served in Iraq, and Afghanistan, and Kosovo. I mean he’s a hardcore dude, so having that guy be my competition, I’m not going to lie, it was pretty daunting.”

But first is first, and when Rudd successfully reached the end point of the traverse, he found himself two days behind the triumphant O’Brady. So how does one follow up such an achievement?

For Colin O’Brady, it’s unlikely to be by slowing down.

«I’m writing a book, public speaking,” he reveals, “and I will say, before too long here I’ll probably be announcing my next expedition because I’m still passionate about pushing the edges of my boundaries. But it’s not necessarily about one-upping myself to the next epic… because I think that’s probably a road to certain death at some point.» 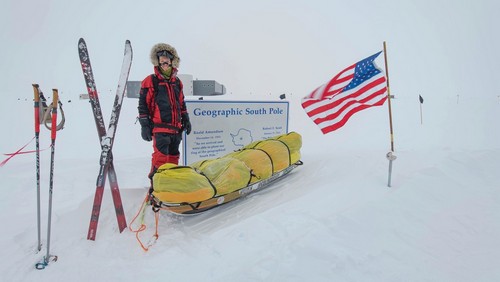 The American made a brief stop at the geographic South Pole before continuing on with his journey alone.

«Exploring different avenues, whether that’s polar environments, or mountains, or oceans, or deserts… there’s so much to explore out in this world, and I think that will be a lifelong passion for me.»