Erik and Emily Orton, a dad and mom with five kids from New York City, knew they wanted to shake up the humdrum of their daily routine. But as parents, they also knew that uprooting their children’s lives – including a daughter with Down syndrome – and going on an adventure would be challenging.

Regardless of the obstacles, Erik and Emily agreed to take their family on a year-long sailing trip throughout the Caribbean after years of careful thought, documenting the ups and downs of their trip in their book Seven at Sea: Why a New York City Family Cast Off Convention For a Life-Changing Year on a Sailboat ($28), and believe it or not, things went a lot smoother than they ever expected. 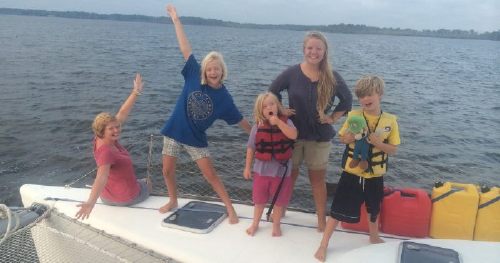 “I would describe [the process] as gradual. It wasn’t like, ‘Hey, we’re just going to go buy a sailboat and go do something crazy.’ It was very incremental,” Erik told POPSUGAR. “We started learning to sail when our oldest daughter was 11 and our youngest was 1. And we just wanted to do something that was new and different, and we thought sailing was kind of beautiful.”

“At a certain point, you just need to go and trust that you’ll be able to find the people and the things that you need.”

Although Emily and Erik always thought the water was gorgeous, they were newbies when it came to boat life at first. But rather than chalking his passion up to a pipe dream, the father of five did something about it.

“I really wanted to learn how to sail, and I couldn’t get a class that fit my schedule unless there were four people,” Erik said. “So I recruited Emily and our two oldest girls, who were 9 and 11 at the time, so that I could take the class. And we did one sailing class down on the Hudson River, down by the Statue of Liberty. And we said, ‘We should go sailing one time as a family.'”

Yep, Hello Kitty Converse Sneakers Are Real, and We Can’t Wait to Get Our Hands on Them