Black and brown Muslim artists such as SZA, Issa Rae, Halima Aden, Noor Tagouri and Huda Kattan are just a few names who have transformed their lived experiences into their work that has started conversations and begun the process of change.

The stories we are hearing about strength and survival are now a part of many women of colours identities. The result of this means that as a society, we assume Muslim women are strong and able to tolerate anything. For so long, being strong against the rise of Islamaphobia and having to put on our ‘best front’ is what been expected. But now, the key agenda for many Muslim women – myself included – is to actively seek joy.

It is easy to feel heavy as a Muslim woman today. Climate change is one reason, with many dense Muslim populations suffering from droughts, spreading across the Middle-East to Turkey, all while the water levels rise and flooding encompasses countries like Bangladesh or Indonesia.

We also have social issues – Anti-Muslim hate crimes are soaring in the UK as a consequence to Brexit, and there’s the concentration camps holding Uyghur Muslims in China against their will. And have we mentioned what’s happening to the Rohingya’s in Myanmar? And how many memes have you seen about Iran and #WW3? I’ve personally lost count. 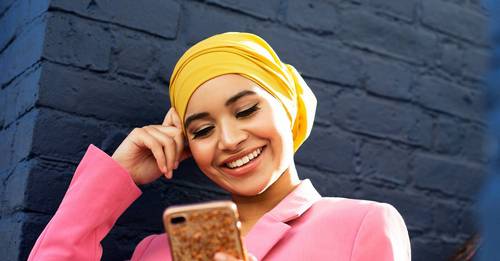 As a response, the work and self-claimed titles surrounding activism rose so much in 2019 that ‘climate strike’ was named the official word of the year by Collins Dictionary. The last year of the past decade demanded Muslim women across all generations, race, sexualities, get up and make their voices heard. Even with influential political statements in Britain such as former Prime Minister, David Cameron, linking the radicalisation of Muslim men to the ‘traditional submissiveness’ of Muslim women – Muslim women have continued to rise up and show the world that we will not remain silent.

Do I think we should stop fighting systemic Islamophobia? Of course not. Do we need to have authentic diversity across several Islamic communities that differ regarding local needs? Absolutely. However, what I am arguing is that though being resistant (while being expected to be ‘modest’ and graceful) is effective, this obsession with strength can leave little room for Muslim women to be vulnerable. You can easily end up putting the causes, your family, your career and dreams first instead of looking after yourself and scheduling joy.

Personally, in 2020, I’d like to start listening to mybody and frankly, knowing when to care about something and when to stop spreading myself thin. It’s a journey to understand a movement is not made up of one person – I do not need to be a part of everything. And it’s not just me. There is a new act of self care that other Muslim women are also pursuing and it is simply – but actively- finding the joy in things big and small.

Ashiya Mendheria, a naturopathic nutritional therapy PhD student, wellness and women’s health writer is beginning with her body. “I am seeking joy by embracing my body.
She agrees that exercise has unfortunately always been associated with looking more ‘attractive’, which can lead to body dysmorphia so going forward , she is going to be “doing workouts but without the negative self-talk and comparison; working with my body, not on my body”.

Similarly, CEO of Amaliah, a platform amplifying the voices of Muslim women, Nafisa Bakkar, is seeking joy through the small and big things with her mind and body. Walking instead of jumping on a fast paced train, being present when sitting and reading and finding joy in Taekwondo which she says, ‘has pushed me physically and mentally”

Bakkar’s business partner and sister Selina Bakkar is seeking joy through letting go of guilt and not falling into the trap of the “business of being busy”. Instead, she is picking up a new hobby to help her relax. “This year it’s painting’.

UK Labour Candidate for the West Midlands, Salma Yaqoob’s resolution for seeking joy comes from stepping out of her comfort zone and cooking different dishes. “I might do a world tour in my kitchen. My home has an open-door policy so there will never be a shortage of food critics to give their opinion on what I have served up!”

For beauty and culture influencer and YouTuber, Shahd Batal, it’s “dedicating more time to my hobbies, surrounding myself with Muslim women who inspire me and travelling to new cities as often as I can”.

Consciously dropping people pleasing and the act of valuing acceptance from others instead of oneself is top of the list for Harry Potter actor, presenter and YouTuber, Afshan Azad, “By doing that, you lose a sense of joy for yourself. I’m focusing more on myself and doing things that make me happy, regardless of anyone else.”

Though it’s invigorating to hear all these Muslim women place importance on their joy, these new habits believes Mariam Khan, author of It’s Not About The Burqa, also need a plan of action. “For me to build joy into my life means being more disciplined. Creating a sort of muscle memory of things to do big and small so joy can exist in my everyday small moments”.

So yes, it’s time to welcome the joy in all shapes and sizes. If we don’t seek joy, consciously reflect and work out what works well for us as individuals, as well as Muslim women, we can’t be of help to anyone, especially those in our global community who need us. In my mind, being a Muslim woman who puts her self care first and foremost, is actually the most radical act.