Clinton was, of course, referring to the long-standing accusations that Team Trump colluded with Russia to influence the 2016 election.

At a NATO summit on July 12, Trump declared that he would ask Putin to address the situation .. . but said there would be little he could do if Putin denied the charges. “He may deny it,” Trump said. “All I can do is say, ‘Did you?’ And, ‘Don’t do it again.’ But he may deny it.”

On July 15, just before President Donald Trump was scheduled to meet for his first formal one-on-one talk with Russian President Vladimir Putin in Helsinki, Finland, Hillary Clinton published a rather pointed tweet: “Great World Cup. Question for President Trump as he meets Putin: Do you know which team you play for?” 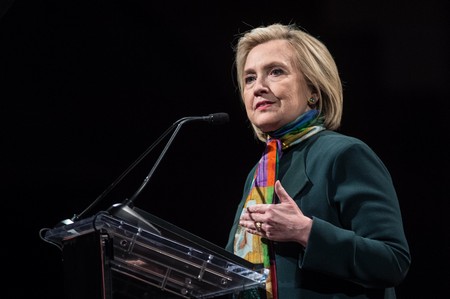 Great World Cup. Question for President Trump as he meets Putin: Do you know which team you play for?

As expected, Putin did deny any Russian interference in the election during his meeting with Trump on July 16. Trump, on the other hand, refused to say whether or not he believed his own intelligence agencies on the matter, despite the fact that 13 Russian individuals have been charged in Special Counsel Robert Mueller’s investigation into the issue. In addition to his refusal to add validity to United States investigations, Trump also expressed doubt about whether Russia was to blame for the election results.

As if to further fortify the concern Clinton expressed in her World Cup-themed tweet, Trump and Putin offered hope that the United States and Russia might enter a new era of cooperation. On Twitter, Trump also blamed the United States for the poor relationship with Russia, citing US “foolishness and stupidity” and a “Rigged Witch Hunt” as scapegoats. For the cherry on top, Russia’s Ministry of Foreign Affairs co-opted the tweet with a resounding, “We agree.” Which team, indeed?

4 Things I Learned When I Moved My Home Workouts Outside

Curious To Give PNF Stretching A Try?