A high school student from Edmond, Okla., could face a potential criminal charge after a viral video showed him knocking a “Make America Great Again” hat off of a peer’s head and grabbing his “Trump 2020” flag.

School officials at Edmond Santa Fe High School told KOCO 5 that they have both surveillance video and cellphone video depicting the incident. Due to student confidentiality, the school will not release the surveillance video.

The confrontation occurred during Edmond Santa Fe High School’s Double Wolf Dare Week, in which students could come to school dressed up and partake in assemblies to raise funds.

A high school student may face criminal charges after a video of him knocking off a peer’s MAGA hat goes viral. (Photo: Facebook) 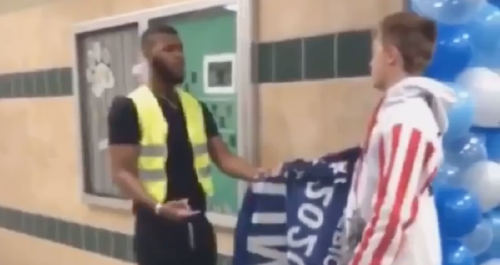 The student in the vest may face an assault and battery charge if the family of the Trump-supporting teen decides to meet with a city attorney within five days and move forward with the assault complaint.

Edmond Public Schools officials released the following statement: “The school district honors students’ First Amendment rights but must, at the same time, be vigilant in teaching and supporting students as they learn how best to respectfully express their opinions.”

The student in the vest informed KOCO 5 that he plans on issuing an apology. The family of the other student told the news outlet that they plan to pursue criminal assault charges.