A Berry Royal Christmas airs tonight with the royals and the queen of baking teaming up to provide a festive feast for charity workers who are working over the festive period and the show also features those individuals whose lives have been helped by the charities.

The seasonal special culminates with the Christmas feast hosted by the royals, with a menu that Mary Berry oversaw.

Bake Off fans will want to tune into BBC One this evening because Mary Berry is back – and joined by special guests Prince William and Kate Middleton. Excited? We are too.

“I did have to tell Prince William off for cheating during a roulade competition” Berry revealed to the Daily Mail. The British baking star said that the show was “Prince William’s idea” after the prince told Berry that his wife, the Duchess of Cambridge, follows her recipes and they were keen to team up for a charity special.

The show also stars former Bake Off winner Nadiya Hussain who is seen helping baking novice Prince William roll up his roulade while Berry wasn’t looking. Meanwhile, competitive Kate is caught dusting her cake with icing sugar after the timer was up. 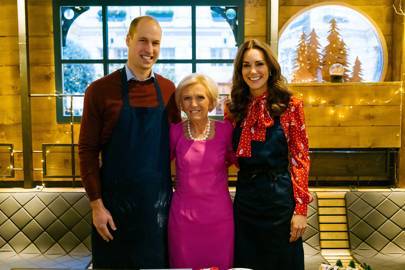 William joked that he had “made hundreds of roulades, loads” before admitting that it was his first time making the dish. After the couple each made roulades, Berry decides, “It’s a draw. I don’t want to quarrel with either of you. Well done for being so sporting – I know you’re both very competitive.” 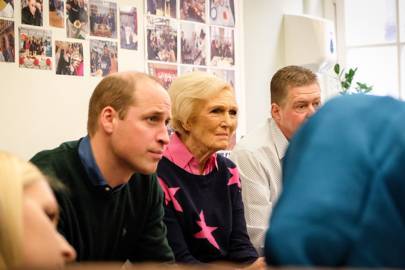 In the show, the couple also talked about homelessness and Prince William revealed that Prince George and Princess Charlotte ask him about the homeless people they see on the way to school.

He told Mary Berry: “On the school run already, bear in mind they’re six and four, whenever we see anyone who is sleeping rough on the streets, I talk about it and I point it out and I explain why and they’re all very interested. ‘They’re like:’Why can’t they go home?'”

Kate also admitted that one of Prince Louis’ first words was “Mary” because the royal household has lots of Mary Berry’s cook books and said one of the last things she cooked with her children was pizzas using Mary’s own dough recipe which were a huge success apparently.

A Berry Royal Christmas airs on December 16 at 8.30pm on BBC One.

Yep, The Haunting of Bly Manor Is Based on a Book You Can Read Right Now

Puerto Vallarta is the perfect destination for LGBTQ+ people