The brand, cofounded by Julie Schott, a former Elle beauty director, is a “positively not boring” skin care line, meaning it has a fresh approach to fighting acne.

Pimple patches are nothing new, but the brand’s messaging is – from the shape of the patches themselves to the cheeky Instagram captions written from the perspective of the product, it flips the script on everything we’ve been taught about acne. Most patches are meant to blend in and be invisible, but these call attention to blemishes. By being so cute, they’re like a little reward, akin getting a gold star on an assignment.

Traditionally, having acne is an experience that’s…less than pleasant. In addition to being embarrassing and literally painful, it can take a toll on your finances, your career, and even your mental health – something I’ve learned first-hand over the decade I’ve been dealing with it. Ever since I started fighting pimples, I understood it was something you dealt with in secret, and so I smothered my zits in concealer and hid my prescription acne cream in my medicine cabinet.

Thanks in part to the acne-positivity movement, some of this stigma is starting to lift, and acne is (hopefully) becoming less of a big deal. Acne influencers (yes, really) are posting makeup-free selfies, women are starting to talk openly, and brands are helping to normalize that we all get zits. One of these brands is Starface, an acne-friendly brand that exclusively makes the star-shaped pimple patches you’re seeing all over Instagram.

Personally, I find acne positivity a little tricky to get behind. Acne is never something I will ever feel “positive” about, and so many brands get it wrong with this forced acceptance. It can also come across as a blatant marketing tactic, with brands trying to sell you something to fix acne while at the same time telling you to embrace it. But Starface seems to have the same feelings about acne that I do (which could be because Schott has also dealt with acne her whole life and knows the struggle). I’m learning it doesn’t define me as a person, but it’s something I would rather not deal with, were I given the choice. 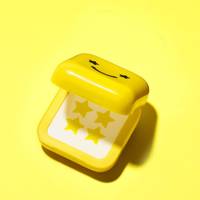 That being said, when the Starface Hydro-Stars arrived on my desk, I practically shrieked in delight. The packaging, a yellow hard plastic “pod” that houses the patches, is incredibly cute, as are the patches themselves. That night I went home excited to give them a try and washed off my makeup right away.

The Hydro-Stars are hydrocolloid bandages, which are what most patches on the market are. Hydrocolloid is used to treat topical wounds as well as to protect zits from bacteria while sucking out fluid. They create the ideal environment for popped zits to heal faster.

So, the question on everyone’s mind: Did they work? Yes, on two levels. Pimple patches don’t tend to work on cystic acne (unless they have microdarts, as Zitsticka does), which is my largest battle. But recently I’ve been fighting off a slew of whiteheads, which is the ideal candidate for a pimple patch. Applying the patches as soon as I got home from work helped keep me from popping any zits, and when I woke up the next morning, the bumps were significantly flatter. The patches stayed stuck to my skin all night and were also great to help zits that I had already popped (nobody’s perfect) heal.

The second way they worked is that they actually made me smile, which is no small feat when you’re dealing with at least five massive zits at a time. Opening the little pod feels like a treat, and while I don’t think I would leave the house with a star on my face, it did make me feel a little more proud of my acne (make no mistake, I still totally wanted it gone).

At $22 for a pack of 32 ($18 for the refill sheets), they’re a little expensive, especially given that the $5 ones I get on Amazon work just as well. But I like knowing I’m supporting a small, woman-led business, and I’m a sucker for good branding, so I’m willing to pay a little more. If it makes a breakout more bearable, it’s money well spent.

The ultimate guide to moles

This simple headset from Flow is approved for treatment of depression