In recent months, Love Island has been escapism in its purest form. It has successfully distracted us from our own politics, by replacing it with the politics of love, bikini-bods, and… loyalty.

This summer, the houses of Parliament and the Love Island villa are two houses which seem to dominate every conversation I have. And it makes total sense to follow a conversation about British politics with one about Love Island because, like lemon after a shot of tequila, the question of what Brexit actually means is always easier to swallow when followed by a passionate conversation about Megan and Wes’ relationship.

And when the islanders’ time on the villa comes to an end, there will be plenty of news for them when they leave. England nearly brought football home, Kylie Jenner was named by Forbes as one of the youngest-ever ‘self-made’ billionaires, and Donald Trump announced himself as Vladimir Putin’s new butt plug… and then backtracked to say that what he actually said was that he isn’t Vladimir Putin’s butt plug, and that we’re all stupid for thinking that is what he said!

Lots of news. But sadly on Brexit, we still don’t really have a clue. 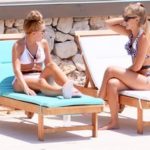 I think our politicians could learn a thing or two from this year’s Love Island contestants. For starters, Boris Johnson could take a sip of that loyalty juice Georgia’s been drinking, because the only person he seems to feel loyal towards is himself. Theresa May could learn about decisiveness and conviction from both Josh and Wes, who stuck to their guns with Kaz and Megan.

It’s this clarity that politicians really need right now, especially the one in charge, who seems to never make any decisions, but rather react to decisions made by people around her.

And obviously Brexit is a little bit more complicated than coupling and re-coupling, and Theresa May has got one of the most difficult jobs in the country right now. However, I do think that our politicians could benefit from being a bit more Love Island.

We trust Love Island more than we trust politics because with Love Island, we know where we stand. We know what we got ourselves into, we know what our votes mean, and we know roughly what the outcome will be.

With politics, when we had the EU referendum, we were lied to about what we were getting ourselves into, we were lied to on the power that we’d have, and now, two years on, we’re none the wiser on what it is actually going to mean. No wonder we’d rather watch Dani and Jack telling it how it is every night, real-life is a mess!

And while Brexit feels like the only political event happening in the UK right now, it isn’t. All of the issues that we had before the referendum still exist, they’re just being put on the back burner because they’re seen as less important than Brexit.

For example, period poverty. In the past year, with my activist collective, the Pink Protest, we’ve been working on the #freeperiods campaign started by teenage activist Amika George. The campaign is a grassroots one which aims to end period poverty in the UK. According to plan international, 1 in 10 girls in the UK can’t afford menstrual products, and are missing out on school and education because of their periods.

For this campaign, we held a protest last December on Downing Street, and as a result of that, thanks to the incredible work of MPs Jess Philips and Paula Sherif, we managed to get some of the tampon tax funding given to the cause of period poverty. However, this is nowhere near the end. Period Poverty has been brought up time and time again in Parliament, most recently when Danielle Rowley was the first MP to announce she’s on her period to the House of Commons. And still, the government deny it the attention it needs.

We may not be able to fix Brexit, but there are still other causes that we could give our loyalty to. When Love Island ends, there will be a huge hole in our hearts. To fill that void, find a cause that you care about that’s being ignored because of Brexit. Follow, support, volunteer, or donate to that cause. If you’re stuck, follow @pinkprotest on Instagram, where we are constantly updating you with tools for the modern day revolution.