It’s not every day you get to eat a spectacular re-creation of the very last meal served on board the Titanic before it sank in 1912, but I got to do just that.

The dinner, hosted by the Liberty Science Center in Jersey City, NJ, and prepared by Donatella Arpaia, Alex Guarnaschelli, and a team of chefs, served as a kickoff for the center’s Titanic: The Artifact Exhibit, which opened Oct. 31, 2015.

The 10-course meal was served over the span of about three hours with a string quartet playing on the side, similarly to how it would have been done on the Titanic itself. Alex and Donatella introduced each course and provided insight on the preparation along with tidbits about what dining on the Titanic was like.

Alex was quick to point out that the staff on the boat had little regard for cost and seasonality when it came to preparing the food. 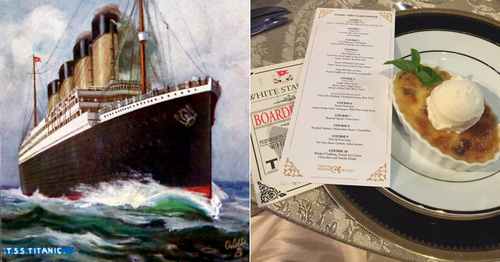 “As a chef who’s always worrying about food cost. .. there was no food cost on the Titanic.. .. Why wouldn’t you just have bone marrow laying around on a boat?” she quipped about the fifth course. She and Donatella also added that peaches for the dessert on that fateful voyage were flown in from Africa and quail was imported from Egypt, because Titanic promised the best of the best for its first-class passengers – though second-class passengers ate very well, too, from what we were told.

The meal served at the event followed as closely as possible to the original one served in 1912, though the chefs did say that the original recipe for the Waldorf Pudding in the 10th course went down with the ship – but I can’t complain, because the current rendition was amazing and probably my favorite thing I ate all night. .. followed closely by the filet mignon that was soft as butter. Keep reading to get the full dining experience.

Adele says she ‘lost the plot’ during her Saturn return, but what is the astrological phenomenon

These halloween pyjamas are the perfect middle-ground between