Do you ever wish you could tell what a guy is like in bed before you let him inside your… heart.

Going to the effort of shaving your legs and putting on the good, lacy knickers is totally worth it for a good shag. But it’s a shame when such prep is wasted on a dud root.

Unfortunately, there’s no aptitude test or sex detector that can perform an analyse before you bonk. The next best thing? Asking relationship, dating and human behavioural experts for some insider tips on what signs lead to a sensational lover vs the red flags…

Good sign: He’s generous with his time and attention

A generous lover is a generous person, and we’re not talking financially. 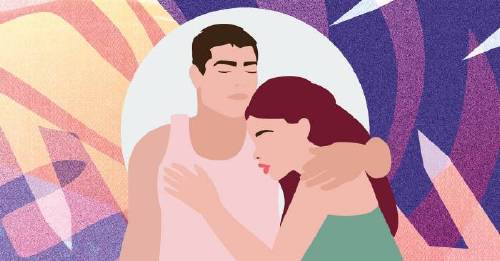 “A man who is interested in who you are, what you think and what makes you happy is likely to be a very generous lover”, says Jo Emerson, Human Behaviour Expert and Confidence Coach.

“A man who makes it his business to put you first and is attentive to your needs, generous with his time and attention.”

But beware, it shouldn’t just be about how he behaves towards you. His generosity should also extend to his family, friends, wait staff, and anyone he comes across. This is the sign to look out for.

If he’s threatened by you paying for the bill, how’s he going to feel when you push him off so you can have a go on top?

We’re not saying masculinity is bad (who doesn’t want to be thrown up against a wall?), but if he sulks or gets mad when you take control of a situation, he’s likely to be a brat in bed too.

“Ask yourself, does their masculinity and pride seem to be a key trait of theirs? Do they seem romantic or does this simply float them by?”, says Clarissa Bloom, Dating, Relationship Wellness Expert. “If it’s the former and romance goes straight over his head, he probably just wants to skip straight to hubby lazing on the couch, and isn’t overly fussed with pleasing you.”

Aside from abs being an instant engine starter, fitness is key, but also not everything.

“Sporty men and men who take care of themselves physically are generally going to have more staying power in the bedroom”, says Claire Stott, Badoo’s dating expert and psychologist.”But men who can talk about their feelings and are emotionally aware are usually much better at intuitively knowing what you want and the flow and connection will be better.”

Confidence is one thing, but over-dressing, prancing and dancing about like a show pony is another.

“He might talk about himself and his popularity, his bedroom conquests and anything else that makes him feel ‘powerful’, and while entertaining to listen to, such a sales pitch always comes with damaged goods he’s probably only good for a slow dance and a snog,” says Kenny Mammarella-D’Cruz, a men’s personal development consultant.

“If the snog is a bit too ‘in your face’ then he’s probably overeager and doesn’t know how to go slow and be with it, rather than over-perform and just ‘do’ it.”

In fact, sometimes it’s the men waiting on the sidelines that end up being better in the bedroom…

“Generally speaking, less overtly confident men are actually much better between the sheets than their cockier counterparts,” says Kate Mansfield, Love Coach. “This is because men who are a little shy can use sex to really let loose and as an opportunity to impress you, they are usually much less selfish and lazy too.”

Assessing a guy’s conversational skills and mood switches is a good indicator of how they may be in bed.

“A man who enjoys listening as well as talking, laughs appreciatively at his companion’s jokes, and can talk about contentious issues such as politics without getting angry is more likely to be able to take another person’s needs into consideration, and that is always crucial between the sheets,” says We-Vibe’s Relationship Expert, psychologist Dr Becky Spelman.

If they flip their lid over something small, especially in a public place, beware.

Singletons, be wary! The ‘softboy’ is the new f*ckboy in the dating world, here’s how to spot one…

Or any other sign of anonymity, such as a picture of their torso only, or their car.

“These are warning signs that suggest he is probably just looking for sex”, says Clarissa. “If this is all you want then fine, but beware if you are also looking for a relationship, as these are the ones to avoid.”

Megwyn White, NYC based Sex and Relationship expert for sexual wellness brand Satisfyer agrees, adding if his pictures feature him ‘posing with attractive females in a strangely narcissistic way, this reflects a closed or shielded personality.’

You can also judge a lot about their message…

“Have they sent a bulk message with no personalisation (name change, a unique element from your profile etc)? Then they are probably playing the numbers game and you should move on to someone worth your time”, says Clarissa.

“A subtle trick here is to put in a comment half way down your profile bio stating something like ‘if you do message me, start by saying your favourite colour, this will help me to know you read my profile’, it’s a soft way of testing their attention to detail, which might help in the bedroom as well.”

If he interrupts you a bit on your first date, this might just be down to nerves, but if it becomes a constant habit it can be a bad sign.

The supermarket’s best Christmas wines, according to a top wine expert…