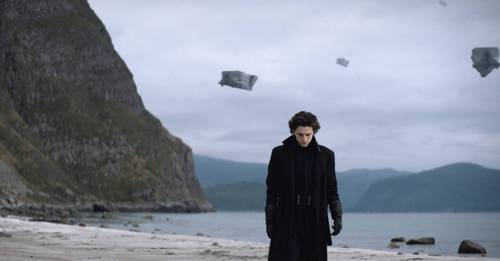 If there’s anything getting us through this new staying-at-home norm it’s TV and films – and even better, plotting what we’re going to see on the big screen when this is all over.

Vanity Fair have got us literally crossing off the days until it’s released (not until December – but still) after they released a new film still showing Chalamet, clad in all-black, walking along a shoreline with strange spaceships lurking in the distance.

On Instagram, the magazine wrote: “It’s time to return to Arrakis. In part one of our preview of Denis Villeneuve’s adaptation of the epic sci-fi novel, get an exclusive look at Timothée Chalamet as protagonist Paul Atreides.”

The publication is set to be releasing more previews this week ahead of the release before Christmas. The story follows Chalamet’s character, Atreides and his family as they embark on a trip to another planet called Arrakis, known as a desert mining planet, to oversee the extraction of melange, the most valuable substance in the universe.

The story follows a battle for control of its planet and its resources. A royal decree awards Arrakis to Duke Leto Atreides and ousts his bitter enemies, the Harkonnens. However, when the Harkonnens violently seize back their fiefdom, it is up to Paul, Leto’s son, to lead the Fremen, the natives of Arrakis, in a fight for the planet.

Chalamet told Vanity Fair, “The immediately appealing thing about Paul was the fact that in a story of such detail and scale and world-building, the protagonist is on an anti-hero’s-journey of sorts.”
“He thinks he’s going to be sort of a young general studying his father and his leadership of a fighting force before he comes of age, hopefully a decade later, or something like that.”

Joining Chalamet in the cast line-up includes Rebecca Ferguson and Oscar Isaac as Chalamet’s parents, Josh Brolin as a veteran soldier and Stellan Skarsgard as the film’s primary antagonist.

It’s not the first time the novel was adapted for the big screen, the 1984 version by David Lynch flopped at the box office but ended up getting a cult following by sci-fi fans.

We reckon this one might be a hit for both!