More importantly: why the hell are we still asking women any of the above?

Our recent activism survey shows that a shocking 0% of Gen Z GLAMOUR readers believe that feminism means women ‘having it all.’ Nada, zilch, none. It’s the same number of times we’ve turned down pasta for celery juice, or thought Brexit negotiations sounded like a hoot. But crucially, it’s also a swift diversion from Gen X’s response to the same question. Our survey shows 10% of this generation believe that’s exactly what feminism means.

That’s because for so long the concept of women’s ability to ‘have it all’ has been tied up with feminism. In its insurgency, feminism was literally about this; about breaking out of the domestic sphere, about being more than just the Victorian ideal of ‘the Angel in the house’ – whose mastery was only over household chores and childcare. The emancipation that these early feminists fought (and died) for, was about having it all: and that meant education, votes, equal pay and the right to not be considered the property of their husbands or male relatives. 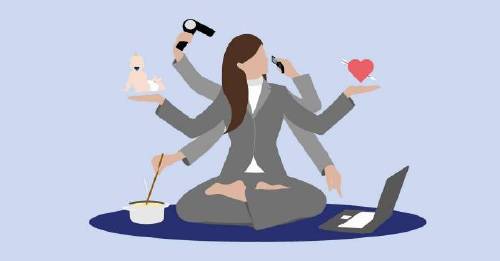 But having it all means something different now. And perhaps its outdated stance is what has Gen Z feminists turned off.

Today, it is more commonly used as a catch-all phrase for women’s ability to raise a family and have a career, largely attributed to iconic US magazine editor Helen Gurley Brown, who literally wrote the book on it; ‘Having It All’ in 1982. It cited her advice for success, for getting everything you want, yet, ironically, Gurley Brown herself had no children. Career and baby: two seemingly incompatible pursuits, still form a puzzle that, even in 2019, we don’t seem to have solved.

Because the fear that ‘having it all’ induces in women, is not only a lingering sense of failure, but the idea that procreating puts them out of the career game. It is not an erroneous fear; shocking statistics show 54,000 women a year lose their jobs to pregnancy or maternity leave in the UK and a MumsNet survey of last year showed 96% of women found having a child had affected their career for the worse. In an attempt to combat this, the government is even currently putting forward legislation to better protect new parents’ jobs after they go on parental leave.

It’s little wonder that ‘having it all’ seems such a bleak and impossible goal. It’s why journalist and editor Farrah Storr has recently been very vocal on the subject, speaking publicly about her decision to forgo children for a career, claiming: “The notion that I could, or would, want it all, was a lie.”

Even one of the biggest proponents of ‘having it all’, Facebook’s Sheryl Sandberg of ‘Lean In’ fame, has recently admitted that her firm belief in its possibility stemmed from her immense privilege. She had the disposable wealth to hire help and, crucially, a very supportive, hands-on partner.

But here is the crux about why having it all may have fallen out of favour with Gen Z- and rightly so. Younger generations, who have grown up with working mothers as the norm, have swiftly realised that ‘having it all’ actually translates as ‘doing it all’ – and that’s not OK.

US journalist Gemma Hartley recently opened up a very useful can of worms when she adopted the sociological phrase ‘emotional labour’ in her book ‘Fed Up’ and applied it to the disproportionate amount of work done by women in relationships and family units. This means everything from housework to writing Christmas cards – seemingly mundane tasks that actually amount to more than a trillion pounds worth of unpaid housework a year. And that is on women, because a 2016 survey showed that women in the UK are responsible for 60% more of this unpaid work than men, including a disproportionate responsibility for caring – be that children or elderly relatives. Much of this, of course, is on top of an actual job.

So if having it all means doing it all, and Gen Z feminists are over it, then where do we go from here?

Perhaps it is time we realised that having it all means sharing it all, it means ensuring that men and women pull their weight as equally as possible in a family, that women no longer feel ashamed for hiring help, getting help or asking for help. After all; men have been having it all for centuries, thanks to the tireless – often unpaid work- that women provided them with. Maybe it’s about time we realised that. And maybe it’s about time we stopped asking women these impossible questions, and started giving them some answers.

This Zero Sugar Ginger Beer Is Now Certified Ketogenic, So Who’s Up For Keto Mules?

This is the world’s most Instagrammable luxury spa