Oxtails! My oh my how I love thee.

We grew up with oxtail stew, a deeply rich, hearty stew perfect for cold days. You don’t find them that often in the market, so when they appear I’ll usually pick up a few pounds.

The oxtail is the tail of a steer, usually cut into segments. It is a flavorful, tough cut, perfect for slow braising in stews or soups, well marbled with fat, and here’s the best part, the bones have a ton of collagen, so good for making a gelatinous stock.

Oxtail soup is served all over Hawaii. Unlike the thick and hearty stew I grew up with, the Hawaiian soup is relatively light (a blessing post holidays), with a thin broth and seasonings from ginger, star anise, orange, green onions, and cilantro. 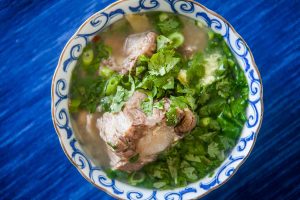 Peanuts make an appearance too. What a combination! The flavors just sparkle.

By the way, although oxtails are often hard to find at regular markets, Costco often carries them.

An odd ingredient, one that isn’t readily accessible in the stores around here at least, is dried orange peel. (Apparently you can buy it pretty easily in Hawaii.)

What I did for this ingredient is I used a vegetable peeler to strip off a long strip of peel (just the zest) from an orange. This I set on a shelf in my kitchen for a week to dry out. It worked great!

I wondered why one would use the dried and not fresh orange peel and I think perhaps it’s because of the long cook time; maybe the dried peel holds up better to long cooking?

If I didn’t think ahead to dry the peel, I would just use a couple teaspoons of orange zest instead.

1 Parboil the oxtails, trim of excess fat: Bring a large pot (5-quart), half filled with water, to a boil. Add the oxtails. Parboil for 30 minutes. Drain the pot. Rinse the oxtails in water. Trim the oxtails of any excess fat. 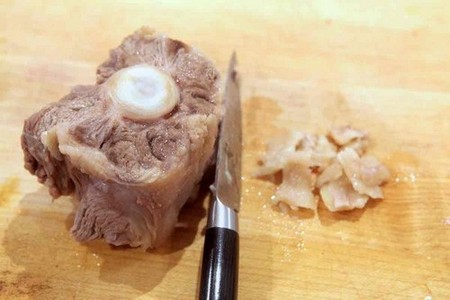 2 Simmer oxtails in water with seasonings for 1 hour: Return the oxtails to the pot. Cover with water by an inch. Add the orange peel, star anise, ginger, and salt. Bring to a boil, reduce to a simmer. Cover and let simmer for one hour. 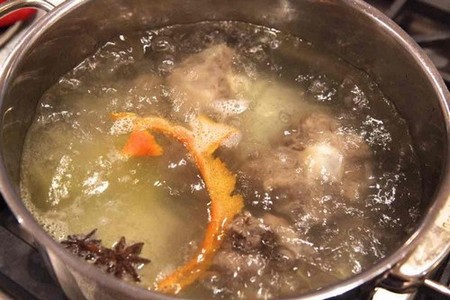 4 Skim fat: At the point, you can either skim the fat off the soup and proceed to the next step, or let the soup cool, and chill it overnight in the refrigerator. The next day the fat will have solidified and will be easy to pull up from the top of the soup. 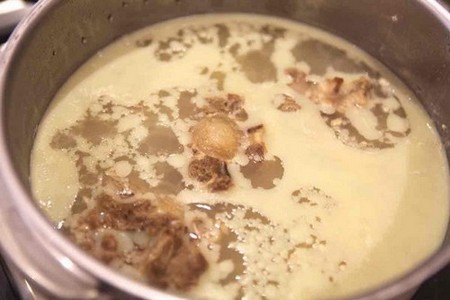 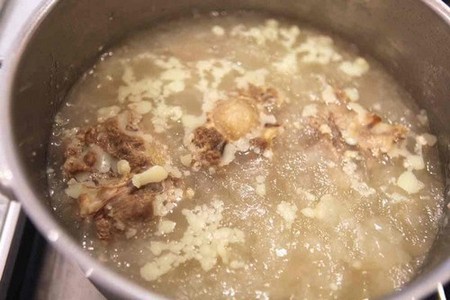 The flavors will also have had more of a chance to blend and be absorbed by the oxtails if you let the soup sit overnight. 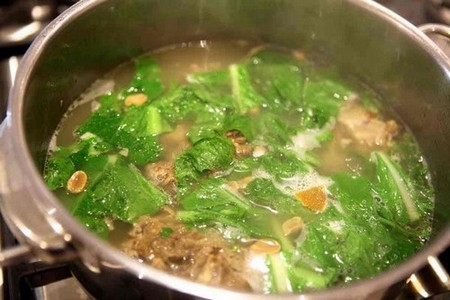 If you want, you can strip the meat off the bones before serving. We prefer the meat served bone-in, in which case you will want to provide a bowl for the bones.