How many nights have you spent counting sheep in a bid to fall asleep quickly for once? Same. We’ve all been there, but apparently it might not just be because we’ve got a million and one things on our minds, but because of a legit condition: delayed sleep phase syndrome (DSPS).

Dr Jess Andrade, an American paediatrician, shared a video on Instagram, and suddenly it all makes sense.

“Delayed sleep phase syndrome is when a person’s sleep is delayed by more than two hours from a normal bedtime,” she explains. “Usually that person has trouble falling asleep, doesn’t fall asleep until much later, and has trouble waking up in the morning.” Sounds familiar.

The most refreshing thing about it, is that the science proves there is, like we’re always harping on about, no such thing as ‘normal’.

What is delayed sleep phase syndrome?

Sleep expert James Wilson, a.k.a. The Sleep Geek, explains: “Delayed sleep phase syndrome happens when the time you feel sleepy and time you wake up doesn’t fit with society’s norms. In turn, this impacts your ability to go to school, work and be involved in family life.” 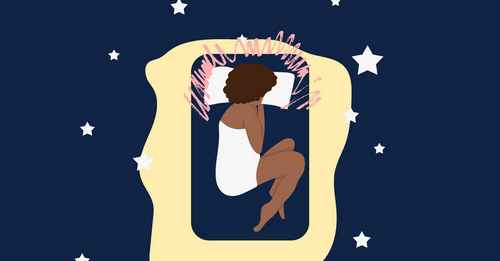 DSPS (delayed sleep phase syndrome) is predominantly genetic, Wilson tells us. “We inherit our sleep type from our ancestors, and some of us are naturally born to wake up later than others.”

He says our age can dictate the best sleep-wake cycle for us, too: “In our teenage years, we are more likely to be best-suited to waking up later. And this often doesn’t fit with the school day.”

The biggest takeaway? What may be perceived as lazy, could actually be a biological condition (DSPS) in which you are genetically built to wake up later, and will go about your day more efficiently if you do so, than others. The. Relief.

How can I treat delayed sleep phase syndrome?

It’s not so much about what each individual can do, but more about society as a whole. Wilson adds: “We need to accept that people have different sleep types and it’s not easy to drastically change, so more flexible working schedules and later school start times would help.”

If that’s not an option (though most companies are on the road to a better #WFH system following the pandemic), Wilson says that light therapy, melatonin supplementation (a hormone which encourages the body to slow down and switch off at night), and behavioural techniques can work wonders. Above all though, he says we should work to “understand our sleep type and ensure our cycle fits, then create a consistent routine, that includes lots of natural light exposure earlier on in the day”.

How to determine which type of sleeper you are? We’re not suggesting you lie in as much possible (that can cause health problems of its own right), but find what works for you by keeping a diary on the days that you wake up early, compared with those that you wake up late. How much do you struggle to get up early on a scale of 1-10? Does it get easier after a few days, once your body gets used to it, or is it equally as hard weeks later? If it’s the latter, it’s likely you’re better suited to a late night and late wake-up time.

How can I tell the difference between delayed sleep phase syndrome, and just struggling to sleep?

Wilson says people are often incorrectly diagnosed with insomnia, when all they really need is to be able to rework their sleep-wake cycle to suit them. If it’s an ongoing and consistent problem (you struggle to nod off every night without fail, and have done so for three months or more), chances are it’s DSPS, whereas if it’s only once every few weeks, you’re probably just not having a good night. Consult a GP or sleep expert for more specific advice relating to your case.

Whichever it is, knowing that it’s OK to go to bed late and wake up late could well be the secret to a solid night’s kip, even if it doesn’t start until midnight.

If you’re heading back to the office after working from home, you’ve probably got commuter burnout

Getting fully vaccinated cuts the risk of long Covid in half, according to a new study of millions of people in the UK

I can’t have sex without pain. I feel unloved and unwanted