Deciding to avoid her usual waves, the brunette swept her hair into a chic up-do with a centre parting. Of course, in a nod to her obsession with the 1960s, the singer who was nominated for Album of the Year, for Norman F***ing Rockwell! finished the look with a strong flick of black eyeliner.
Lana Del Rey loves a vintage look whether that is in her songs or when it comes to her red-carpet style and her ensemble for last night’s Grammy Award 2020 was no exception.

But it’s her story of how she found her dress that makes Lana Del Rey’s Grammy’s red carpet look the most relatable. Speaking to Entertainment Tonight on the red carpet she said, “I was at the Mall and I saw this, and I loved it.” 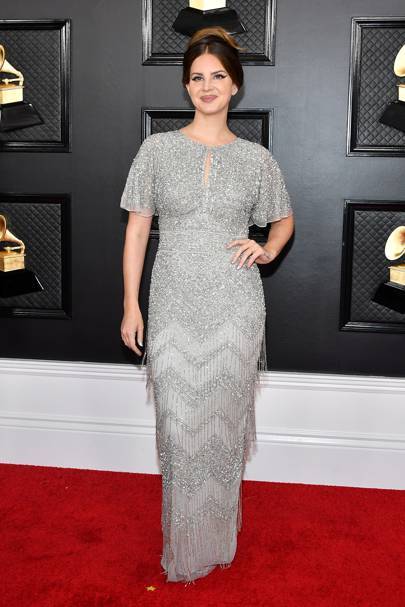 Speaking of the silver flor length dress, Lana continued to say, “It was last minute. but I loved it,” but was unable to identify the brand. We love how relatable this story this.

Lana Del Rey also decided to use the Grammy Awards red carpet to make her public debut with her new boyfriend, Sean Larkin who is a full-time police officer in Tulsa, Oklahoma. For the occasion he slipped out of his Police officer uniform in favour of a black tuxedo.

Speaking on the red-carpet Lana joked she was matching her silver dress with his silver hair. Previously she described her new boyfriend as “a good cop who sees both sides of things,” to the Los Angeles Times.

The couple went Instagram official in December last year and she said last night she was, “very happy.” After losing out to Billie Eilish in the Album of the Year, Lana seems to have the prize she really wants, a hot cop on her arm and a cracking dress from the mall.

From the Kardashians to Chernobyl and Big Little Lies