But this isn’t quite the ‘hair trend’ we had in mind. What we weren’t quite expecting to see doing the rounds on social media is ‘hair cracking’ or ‘scalp popping’. Fascinated? Confused? A little disturbed? Yeah, us too. And yes, it really is as weird as it sounds.
This time of year is rife with seriously cool, original hair trends. There’s the elongated bob cut; copper, babylights and champagne gloss colours; and even the modern perm that we’re all asking for in salons.

Over the past few weeks, the hashtag #ScalpPopping has soared in popularity on TikTok, with over 6.6 million views on the tag so far. The top video is by user @yanasemerly with over 832,000 likes. In the clip, a friend can be seen twisting a small section of Yana’s hair around her fingers, before pulling on the strands which results in a loud popping noise.

“Did you see what I did?” Yana says, to which her friend replies: “You twisted it around your finger twice.” 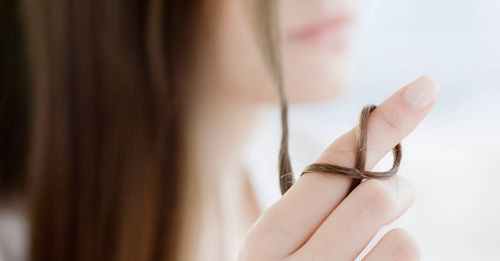 Her friend then gently pushes against Yana’s head for resistance before tugging on the hair close to the scalp to make the popping noise.

However, other TikTok users who have tried the trend have been met with pretty painful results.

“I must be doing it wrong because that hurt,” one user commented, while another said: “I’m in pain.”

“Directions unclear and now I have a bald spot,” one even replied.

So while it’s safe to say we shouldn’t be trying scalp popping at home, where on earth did this bizarre trend come from?

Massage therapist Jon Musgrave told Health that hair cracking is actually a Mexican massage technique. “I first became aware of it as something Mexican women do to help relieve heat-induced migraines,” he said. “It’s not a standard Western massage technique, and it’s not something that I would do to myself or to someone else.”

Musgrave goes on to highlight the potential complications of scalp popping, including tearing the skin or its connective tissues, as well as potential neck strain.

Basically, do not try this at home, kids.

Gwyneth is now selling a candle that smells like her orgasm, because of course