Simply captioned “It’s almost feeding time,” the brief clip shows a bunch of rats running along the floor of a dark, dirty warehouse, and. .. well, that’s it. What’s all that stuff on the floor, though?

And are the rats the ones who are being fed? Or are they running from something far more sinister? Given the monsters featured in the previous two seasons of the show, we have a feeling it’s the latter.

Netflix declined to go into specifics about what the clip means, only offering up another tweet with a bunch of rat emoji.

We might not have an official trailer for Stranger Things season three, or even a plot, but want to know what we do have? Rats. A LOT of rats. On Tuesday, the show’s Twitter account shared a second, equally cryptic teaser for the hit sci-fi show, and although it’s making more than a few shivers run down my spine, it’s also giving me hope that a real look at the third season is closer than ever. 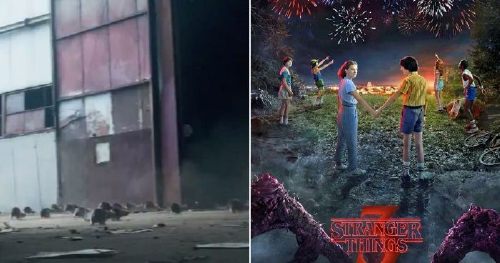 What’s interesting is that “World Rat Day” (yes, they have their own day) happens to fall on April 4, which is just a few weeks away. Could that be the day we’ll finally get our hands on a full-length trailer?! It would be even more perfect, considering season three’s release date is July 4, putting the trailer debut at exactly three months before the season premiere. But it’s also worth pointing out that this isn’t the first time we’ve seen the rat imagery in connection with season three – there are rats on the poster, and the second episode of the season is called “Mall Rats.” Coincidence? I think not.

It’s looking more and more like there’s going to be a major vermin problem in Hawkins. Could they spread some kind of weird, Upside Down-borne disease? Will the rats turn into Demodogs? Do we have an epidemic on our hands?!

Watch the teaser ahead to see if you can pick up any more clues before the show returns on July 4.