The first time I had a Grasshopper cocktail was shortly after I turned twenty-one. I was at a Christmas party that was about as classy as you might expect when hosted in a house on Sorority Row and attended by a bunch of recently-legal drinkers.

There was a keg dressed as Santa, guys and girls in fake antlers, and pirated Christmas music blaring over the din of the crowd. And if you could push your way through the tipsy mass of people, one noble student was playing bartender in the corner.

The choices she gave us were mulled wine or a Grasshopper cocktail. Not yet one for wine and unsure what a Grasshopper was, I chose the latter. I was assured it was a fine choice and watched as she poured together something that was green and full of cream. I winced, expecting it to turn into a curdled, nasty mess.

Surprise, surprise, it was anything but! It was sweet and creamy with a flavor reminiscent of melted mint chip ice cream. Practically Christmas in a glass.

While some cocktail snobs may consider the Grasshopper a campy drink-your-dessert cocktail, I prefer to embrace its kitschy nature. The bright green drink is a conversation starter. Anytime I serve it at a dinner party I find my guests either joyfully recalling the last time they had one, or marveling that they had never tried one before. 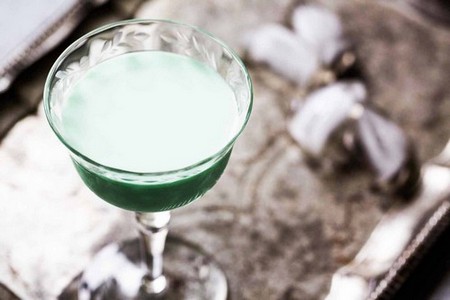 You will have to pick up two somewhat esoteric, though easily found, liqueurs. Crème de menthe is a bright green liqueur with a powerful mint flavor. The other is white crème de cacao, which is a clear, chocolate-flavored liqueur that was wildly popular in the nineties for chocolate martinis and Brandy Alexanders.

1 Shake: Place the ingredients into a cocktail shaker filled with ice and shake well for about 10 seconds.

2 Strain: Strain the cocktail into a chilled coupe or martini glass. Serve immediately.