Glastonbury founder Michael Eavis and his daughter Emily who oversee the festival made the decision after realising that it had “become clear that we simply will not be able to make the festival happen this year.”
Glastonbury Festival 2021 has been officially cancelled today as the festival organisers made a statement confirming the news, “with great regret.”

This is now the second year the music festival has been called off. Last summer, organisers announced the news in March as the virus took a grip on the UK, just a week after the line-up had been revealed.

In a statement they said: “With great regret, we must announce that this year’s Glastonbury festival will not take place, and that this will be another enforced fallow year for us.” They added, “In spite of our efforts to move heaven and earth, it has become clear that we simply will not be able to make the festival happen this year. We are so sorry to let you all down.” 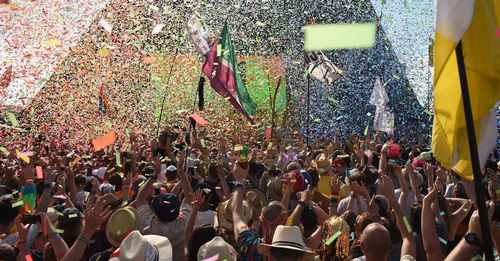 With great regret, we must announce that this year’s Glastonbury Festival will not take place, and that this will be another enforced fallow year for us. Tickets for this year will roll over to next year. Full statement below and on our website. Michael Emily pic.twitter.com/SlNdwA2tHd

The event will not be rescheduled for this year due to the on-going uncertainty surrounding Covid.

Information on the event’s website has said that those with 2021 tickets would be “automatically rolled over to a like-for-like booking for the 2022 Festival” but anyone wanting to cancel would receive a full refund.

The organisers said, “We are very confident we can deliver something really special for us all in 2022!”

Earlier this month, Emily Eavis said there was no news that Glastonbury 2021 was cancelled, denying claims made by Spice Girl Mel B on BBC Radio 5 Live that it had been.

Many are not surprised by the decision to cancel this year’s event. Paul Reed, chair of the Association of Independent Festivals (Glastonbury is not a member of AIF) told The Guardian howweverr that it could impact other 2021 festival schedules.

“You have to consider its global and cultural significance – it’s the largest green-field festival in the world, and it could set the tone in terms of public confidence for festivals going ahead this year.”

Glasto fans were quick to react to the news on Twitter, one wrote:

“Sad news but definitely the right decision. Thank you from the bottom of my heart for letting us hold onto our tickets. It makes the pain a little easier”

You haven’t let us down! Whilst devastating for everyone involved it’s impossible to see an alternative given the current situation. So thankful we can carry our tickets over to 2022. Sending much love ♥️

Another said, “It’s for the best… Next year it will be bigger and better and happier I am sure…”

One Twiter user said: “Totally understandable but absolutely gutted…for all of us, and for the whole team that organise it. The longest I’ve gone without a glastonbury festival since 1993. I am missing it already.”

Some are calling for a return to a virtual Glastonbury 2021, as seen last year when the BBC showed some of the festival’s biggest highlights from the last 50 years.

“Makes me sad, but think it’s the right thing to do. #twisto we’ll just need to the virtual again.”