The Jackie bag was first introduced in the 1950s as the Constance, before being renamed in 1964 after the First Lady Jacqueline Kennedy Onassis – who reportedly used her bag to shield herself from aggressive paparazzi. Hashtag girl power.

At Gucci’s autumn/winter 2020 runway shows, we saw a version of their Jackie handbag reissued for the first time in over a decade. And we couldn’t have been more excited.

This slouchy, hobo bag, which originally came in both cloth and leather, is super feminine with a signature piston strap closure to the centre.

Hobo bags, defined by their slouchy shape, are a huge trend for SS20 – just look in the direction of Zimmerman and Loewe. So, it seems pretty fitting that Gucci have bought their iconic luxury handbag back just in time for the season. 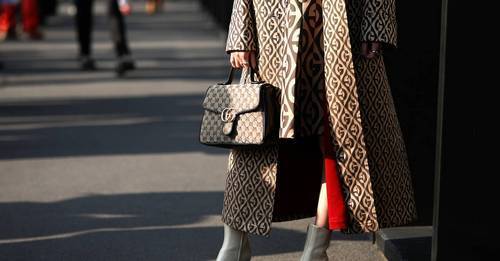 Alessandro Michele has since shrunk the bag down a tad, and for autumn/winter 2020, we’ll see the design in patent leather and pastel shades. The excitement is real.

Gucci are not the only luxury fashion brand digging an old design out from the depths of the closet for the new season. Dior recently bought back their iconic Saddle Bag (first released in 1999) while Prada’s original nylon backpack was reissued before sparking the designs behind an entire new line of accessories.

Since the updated Jackie bags aren’t *actually* for sale just yet (but the buzz around them is already huge), we’ve seen a rapid influx in sales on various second hand and resale websites. In fact, luxury online resaler Vestiaire Collective saw a staggering 631% increase in sales of the Jackie bag the day after the show. And the best part? For the time being, Jackie bags can be found for less than £300 on the site. Hoorah!

When Jackie bags hit stores in June, they’ll be priced at four-figures, which means the price of originals is likely to sky rocket. Similarly, you might just be too impatient to wait ‘til June as we are.

Ruffles are a huge trend this autumn