The problem is, his version of cleaning up post-apocalypse (because that’s what we’re dealing with after a trim) is very different from mine. I’ll leave the bathroom sparkling and come back to a suspicious new furry rug on the floor.

It’s like those confetti canons you explode – bits show up for days after. Hence it’s probably the thing we argue most about.

I love my boyfriend dearly, but one thing I don’t love, is finding bits of his beard in our sink, or worse, my bronzer, which he uses as a mirror to trim his neck when I’m not looking.

Despite co-habiting peacefully for the most part, the hair thing is our kryptonite. Don’t get me wrong, I love his beard when it’s attached to him – the shaggier the better, quite frankly – but it’s a different story when it ends up stuck to the bottom of our feet and in our bed. 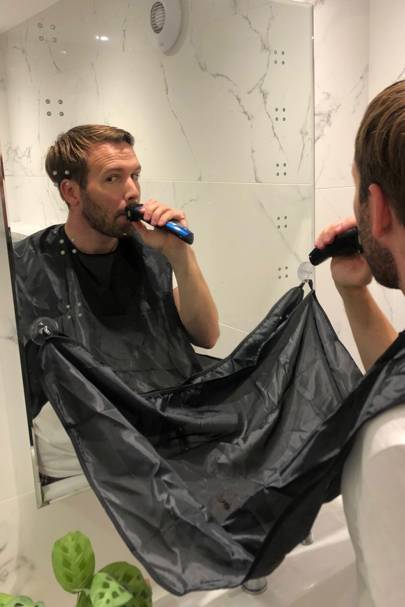 From the sound of things, it’s a pretty universal gripe. Plenty of mates have confessed to stewing while scrubbing up rogue stubble, which is why I’m pretty smug about this next discovery…

Beard bibs. They’re life-changing, and possibly the best £6.99 I’ve ever spent. I picked up this one here on Amazon. One end wraps round their neck like a baby bib (or, a “barber cape” if you’re struggling to sell it to them), the other suction cups to the mirror to create a ledge that catches all the hairs in one spot while they de-fluff. Afterwards, they can empty it down the loo, shake off in the garden or funnel it down the plughole where it belongs.

It pains me to realise I get my kicks from a clean sink, but here we are. It’s thrilling. And, he’s just grateful I’ve stopped whinging about the mess, so everyone’s a winner.

Always, according to one of the industry’s best