Teigen announced the arrival of their new furry bundle of joy with posts on Instagram and Twitter, where she also revealed the new puppy’s name. ‘Welcome to the family, Petey!’ she wrote, accompanied by an adorable video of the puppy snuggled up on a blanket on the sofa. She then proceeded to post several more videos of the poodle puppy with various members of the family, including one of her daughter Luna carrying him around and an insanely sweet one of her son Miles kissing him on the nose.
Need something to brighten up your day? We’ve got you covered – Chrissy Teigen and John Legend have just adopted a brand new puppy and we defy you not to ‘AWWWW’ out loud when you see a pic of him.

As if that wasn’t enough, it turns out it was none other than Ellen DeGeneres who helped the family adopt Petey, after she shared a heart-breaking story from The Wagmore Pet Hotel & Spa on her show’s Instagram page. The organisation had rescued a family of eight puppies, along with their parents, and were in desperate need of funds to look after the dogs and families to take them in. 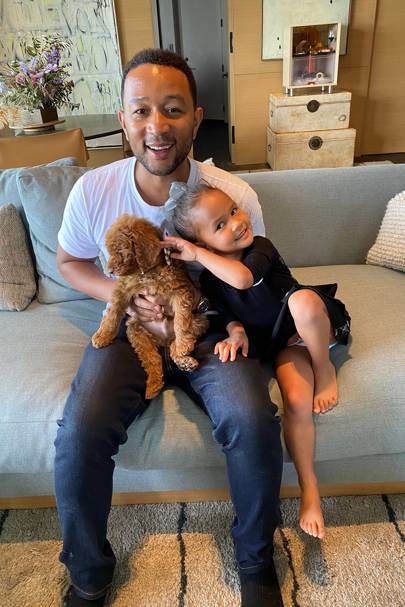 Cue Teigen and Legend who, after seeing the post, immediately started looking into whether they could adopt one of the puppies. Their hearts were quickly stolen by little Petey, who Teigen shared on Twitter they named after the parakeet in Dumb and Dumber.

And in even more cheerful news, the rescue’s Instagram page shared that all of the pups were able to get the vital vaccinations they needed, thanks to generous donations raised, and that all of the dogs got ‘a clean bill of health’ and would be ready to visit with potential adopters in the next few days. Suddenly, January’s not looking so glum after all.