Outlining the Christmas TV line-up, BBC’s Chief Content Officer Charlotte Moore that the sequel is definitely in the pipeline when she explained that, unlike last year, the much-loved show wouldn’t be back for a festive instalment in 2020.

Remember when the Gavin and Stacey Christmas special had the nation rejoicing in unison last year? While it was short lived, it was dose of festive joy we all needed. Since then, fans have been eagerly awaiting news of a Gavin and Stacey follow-up and – as if Christmas came early – the BBC have just confirmed that it is officially happening at some point in the future.

The BBC reported: ‘Last year’s biggest ratings hit was the return of Gavin and Stacey. Moore said a follow-up had never been planned for this Christmas. “That wasn’t something that was going to happen this year,” she said. “One day.”‘

Vague, yes, but definitive enough to get us excited! 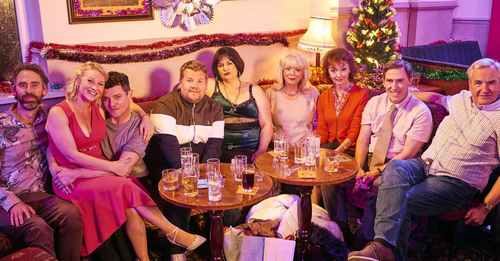 News of more Gavin and Stacey began circulating when James Corden reportedly told the cast that there ‘could be more to come’.

Oscar Hartland – one of two babies who played Nessa and Smithy’s son ‘Neil the Baby’ in the original series, who returned for the festive ep – revealed on Good Morning Britain that he’d asked Corden about the possibility of new episodes while on set.

“I did ask James in the process of filming. He said it’s just what the people want,” Hartland said. “Me, I would love it to happen. It really depends what other people think about it, and whether they like it or not.”

Plus, earlier this year, Larry Lamb (who plays Mick Shipman) told OK! Magazine: “I think it would be pretty cruel to leave us on that cliffhanger. After the response it got at Christmas, you can more or less be certain that, sooner or later, there will be more.

“I’m sure the BBC can persuade Ruth and James to write more, so it’s a question of when, not if.”

While the pandemic has delayed filming on production on many TV shows this year, we’re keeping everything crossed that Gavin and Stacey could return in 2021.