Arya Stark is the ultimate badass. 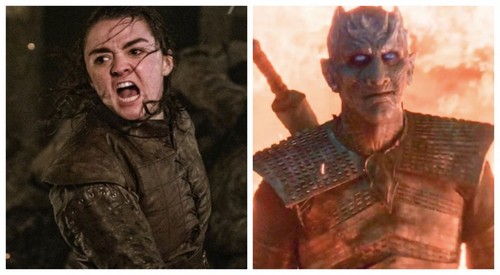 It was dark and stormy on HBO Sunday night. Like, too damn dark. Up front, let’s acknowledge it: a lot of Game of Thrones fans were slightly annoyed during the third episode of the final season because they couldn’t quite see all the action.

It was a baffling choice by showrunners but probably couldn’t be avoided given the fictional setting and situation. Still, the relative darkness of virtually every scene, even in the most hectic moments of the Battle of Winterfell, made viewers work to figure out what was going on, including just who the hell actually died by the time all was said and done.

The biggest moment was easy to see and marked the most major death. An unexpected character ended up the savior of Westeros by launching what should have been a suicidal attack on the Night King. Do not watch the following if you haven’t seen episode three. Click away. You’ve been warned.

That’s right, in case you haven’t seen the character’s name trending everywhere on social media, now you know: Arya Stark (Maisie Williams) defeated the Night King and the White Walkers and she did it in style.

In a show this big, with such a passionate fan base, there were complaints about this twist, but not enough to drown out the consensus that Arya just became the ultimate badass of the entire series – The Seven Kingdoms’ own petite, female John Wick. This video gives a pretty good overview to general audience response.

And all credit to Maisie Williams: she sold that kill, somehow making it even more satisfying than it would’ve been in the first place.

So the Night King and his entire horde were defeated the moment Arya drove that Dragonglass dagger into his chest: That’s one huge death. Here are more, as far as we know – corroborated by THR:

That’s right, even if they were badly injured, it looks like all the most major characters made it through. And the trailer for episode four says they are not done fighting yet, they just have a new target: Cersei Lannister (Lena Heady).

So the battle against the Night King and the White Walkers was «The Great War» and the final three episodes will be devoted to what’s being called «The Last War.»

Anticlimactic? We’re not there yet, so who knows?

If the brightness setting on your TV was pretty high, you know that the Battle of Winterfell mostly lived up to the hype. From the moment the Dothraki charged the White Walkers with flaming swords only to be utterly destroyed it was a nailbiter, nonstop grueling fighting, including Jon Snow riding a dragon like a pro and Daenerys Targaryen holding her own with a short sword as she fought beside the doomed Jorah Mormont.

The next phase of battle for the Iron Throne begins Sunday when Game of Thrones sepisode four airs at 9 p.m. Eastern Time on HBO.