«I know it wasn’t too dark because I shot it.» 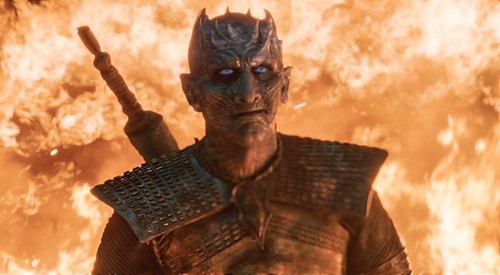 The long-awaited episode 3 of Game of Thrones‘ final season ultimately delivered. It was big, violent, moved the plot forward, and gave a favorite character one of the best TV moments ever.

Seriously, if you didn’t enjoy watching Arya Stark (Maisie Williams) knife the The Night King (Vladimir Furdik), you might have to turn in your GoT card, stat.

That said, there was one big problem, and it’s evident in the clip above (though the big moment is plenty easy to see). The whole thing was just too damn dark.

There were plenty of tweets about it, and of course the complaints got back to the people in the Thrones production crew. Cinematographer Fabian Wagner, for example – and Wagner didn’t appreciate all the bitching.

…Fabian believes the pixelation and muddy dark colors fans saw on their TVs and mobile devices are due to HBO’s compression of the episode … which leads to poorer visual quality. This is made worse if it’s being viewed on a streaming service with a weak connection … or in a room that’s too bright.

As Wagner puts it … «[GoT] has always been very dark and a very cinematic show» and should be watched in a dark environment. Ideally, this means viewing it like you would a movie – in a dark theater.

Wagner also suggested watching on TV (not on a phone) in a very dark room, with your TV’s brightness settings tweaked.

Wagner couldn’t help but sound a little defensive. He also indicated that showrunners wanted it dark because the battle scenes were supposed to be chaotic.

«We tried to give the viewers and fans a cool episode to watch,» Wagner said. «I know it wasn’t too dark because I shot it.»

People are usually prepared to do some leg work if they like a show. Passive consumption isn’t actually passive anymore; viewers are checking wikis for background, reading tweets for others’ reactions, you name it.

But digging into your TV’s brightness settings without potentially screwing them up beyond fixing sounds like a bit of an ask.

This is Game of Thrones, though. There are probably plenty of fans looking at their TV operations manuals right now.

‘Game of Thrones’: The Night King’s Fire Spiral Mystery Has Been Solved