Though the number of tests on living animals was still high in 2018 at 3.52 million procedures, the figure was down 7% year on year and the lowest it’s been in over a decade.

Scientific testing on live animals has reached a 10-year low, according to new Home Office figures.

Of the procedures carried out by researchers, around half – 1.8 million – were experimental, and 56% of them were for basic research, mainly for cancer, the immune system and the nervous system.

The rest of the tests over the course of the year were done in order to create and breed genetically altered animals.

Most of the animal testing (93%) was done on mice, fish and rats, which are historically the most commonly used for research – although the number of rats used for testing purposes was down by 27%.

However, though the decline in testing on live creatures is promising, the number of lab experiments on birds increased from 130,000 to 147,000, while worryingly 1% of the overall testing was carried out on specially protected species, i.e. cats, dogs, primates and horses. The number of cats subjected to tests was down 20%, but more dogs and primates were used year on year. 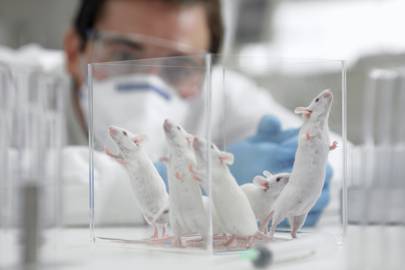 The new figures show that over 40% of the animals experienced pain that’s considered ‘sub-threshold’ – minimal discomfort that’s no worse than a pin prick. However, almost 40% went through ‘mild’ discomfort, while 14.7% had ‘moderate’ pain and a depressing 3.6% suffered ‘severe’ discomfort in the testing process.

Much of the research is done at some of the UK’s main universities and institutes, with stats from Understanding Animal Research revealing that over half of the tests take place at 10 key organisations.

With numbers at their lowest in years, UK labs are all said to be replacing animals wherever possible, though it’s still considered essential for complex scientific research.

Reap the benefits of massage therapy…