Ruby and Graham matched on Bumble in early March. They had a perfectly pleasant date in a wine bar. Ruby thought Graham was sweet- a little shy perhaps.

Graham was sweating so profusely through the new shirt he bought for the occasion that he wouldn’t be able to tell you much of what he thought, bar the fact it was hot, and so was Ruby.

Congratulations to the graduating class of Lockdown 2020; you did it! You baked your banana bread, you followed @connellschain, you mastered the art of Zoom dressing, you successfully peed in a bush in most parks you socialised in.

I want to applaud you for your tenacity and dedication during this difficult time, and hope that you will continue to bring the lessons learnt in lockdown to your dazzling new future as a post-lockdown, pre-vaccine terrifyingly confused person. 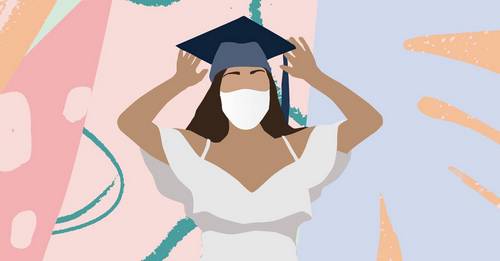 And now, let’s take this opportunity to single out some of the standout stars of your graduating class.

Their second date was dinner, during which they discussed the strange virus now devastating Italy and Ruby wondered if her May trip to Rome may be in jeopardy.

On their third date, Ruby and Graham slept together. Lockdown was announced the next day. Ruby and Graham made the impulsive decision to move into Ruby’s one bed flat in Peckham.

It’s now July and the couple have become inseparable. They host couples dinner parties in their shared garden, have merged their friends in park picnics, have discussed a real future together; marriage and babies. Neither Graham nor Ruby think they have found the one, but neither Graham nor Ruby are prepared to start dating again in the age of Corona.

Anne was furloughed in April from her job as a finance firm receptionist. She downloaded TikTok in an attempt to stave off boredom and found she was a natural. She learnt all the TikTok dances and soon started creating her own. She got her cat Kibbles involved and found he was so popular that she started a TikTok and instagram account just for him.

Both of them now boast followers in the six figure numbers. Kibbles is coming out with his own line of cat merchandise and Anne is promoting make up and fitness gear on instagram. Her boss called last Friday to say the office was opening up again. She was too busy telling her followers to swipe up to shop with her special discount code to notice.

Tamara moved back in with her parents during lockdown as she didn’t fancy isolating in her studio flat alone. She decided to make sourdough during lockdown. Then she moved on to banana bread (why not eh?) but found it just wasn’t challenging enough. She bought cookbooks on Amazon, both to broaden her repertoire and because post was becoming the most exciting part of her day.

She was soon trying to master complex pastries and elaborate roasts for her family who began begging her to reactivate her Deliveroo account, or just buy a microwave meal from M&S. Her mother has twice had food poisoning from Tamara’s less than scrupulous approach to cooking shellfish and her father has now decided to hide her cookbooks. Nevertheless, she persisted.

Most likely to… write a bestselling novel

Amira was furloughed on full pay at the end of March and decided it was finally time to start a project. She tried learning the violin but this aggravated her neighbours so much that she was forced to stop (though she still thinks getting the whole building to sign a petition against her was a bit much).

Instead she tried her hand at writing and found she was a natural. She is now on her second book of what she imagines will be a twelve-part epic saga in the vein of Game of Thrones, centred around a fearless warrior queen battling an unseen but deadly foe called Rona. She has been on hold twice to HBO asking if they want the film rights and has been emailing Netflix since June with no reply.

Most likely to….be the life of the party

Laura doesn’t do well with boredom. She doesn’t like to stay in, sit still, read, even watch a TV show that’s longer than half an hour. She spent her gap year as a shot girl in Ibiza, she lives for bar-hopping and clubbing. ‘Out out’ isn’t an option for her, it’s a way of life. She doesn’t recognise a Saturday or Sunday morning without a hangover.

Lockdown has, therefore, been a nightmare. Not only did her summer of festivals and a week in Mykonos get cancelled, but she’s been forced to stay home with her own thoughts and nothing but a crate of Whispering Angel for company.

So, she decided to use her time wisely and drew up a social plan for when lockdown was over. She booked every conceivable pub and restaurant she could think of once Super Saturday was announced. She turned her back garden into a party terrace, complete with furniture, an outside bar and lanterns. She has scheduled a party for every weekend from now until October and has already booked a flight to Mallorca in September. Nothing will slow her down now she has been released from captivity, not even her friends who are already exhausted.

Christine was always annoyed by certain issues: wealth inequality, sexism, racism…you know, the usual stuff. She just never did anything about it. But in April, Christine lost her job due to Coronavirus cutbacks at her company. Now she’s furious.

She started a campaign group, with its own instagram and twitter account, to fight against economic injustice in the UK, she marched in the Black Lives Matter protests and the Trans Rights are Human Rights march. She swotted up on political theory books and anti-racist resources. She started tweeting cabinet ministers and raising hell online about the dire state of the country. She has decided to run to be her local MP in the next election. She has already designed her own campaign tees.

Most likely to….be awarded an OBE

Martha and Ben have two young boys under five. They used to be the joy of their lives and seeing their faces when they came in from work was the highlight of their busy and hectic professional days. Little Michael and Joshua used to be total angels that brightened up their lives, until lockdown happened, WFH and homeschooling began and Martha and Ben wondered when it was that their little babies became the devil spawn from hell.

They scream during zoom calls, they spill coffee on work documents, they won’t pay attention to home lessons and cry at a pitch that Martha assumes only dogs can hear.

Ben’s lockdown beard is the result of not remembering when the last time he had a shower was, or was able to get five minutes alone to shave. Martha doesn’t know what day it is, and is surviving on a diet of rage and rosé. When schools opened up again, Martha and Ben took annual leave to sit in their garden and cry happy tears of relief. They deserve a place on the New Years honours list, for services to Queen and country.