The news of an all-black table read comes after decades of criticism over the lack of diversity in the original show which stopped airing in 2004. Despite its global popularity, the absence of black cast members has remained a controversial talking.

So, what can we expect? Based on “The One Where No One’s Ready” from season three, we will see the story center on Ross’ anxiety as his friends struggle to get ready in time for a function that evening.

Have you been waiting all your life for Friends to make a re-appearance? Well, today’s your lucky day as one of the most famous episodes of all time is set to be re-enacted – and the good news doesn’t stop there. Hosted by 10 Things I Hate About You star Gabrielle Union, the table read will feature an all-black cast.

As part of the “Zoom Where It Happens” initiative, which aims to raise awareness around voting issues affecting the upcoming presidential election, one classic episode of the hugely popular TV series will be reimagined with an all-black cast taking on the roles of TV legends Rachel, Monica, Phoebe, Chandler, Ross and Joey. 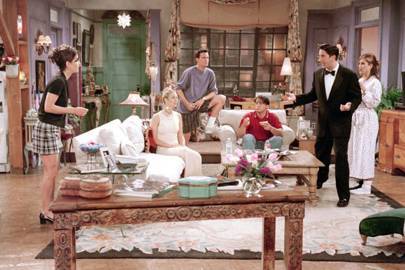 Now for the best part, who will make up the new six? Drumroll, please. Ryan Bathe will take on the role of Rachel Green, Aisha Hinds will play Monica Geller, and Orange Is The New Black’s Uzo Aduba stars as Phoebe. Meanwhile, This Is Us’s Sterling K. Brown is Ross Geller, Kendrick Sampson will be Joey Tribbiani, and Keremy Pope will feature as Chandler Bing. If there is a group of people who can successfully re-enact a Friends episode to its legions of fans, this is it.

The news of an all-black Friends episode follows on from a table read of The Golden Girls starring Tracee Ellis Ross, Regina King, Alfre Woodard and Sanaa Lathan.

This is undoubtedly set to be one of the most iconic moments since the American sitcom came to an end. Get it in the diary, people.