“I’ve never been a fan of maternity photo shoots. I’m not a fan of those, and of gender reveals. … I feel like it’s just people finding reasons to have more than one baby shower,” Tuttle tells Yahoo Lifestyle. “I was looking at Instagram pregnant-lady posts in the Explore tab, and I’d roll my eyes.”

One expectant mother sure knows how to set the internet ablaze.

The idea for her less-than-traditional photo shoot came to Tuttle when a friend, who owns a store called Dysfunctional Grace, had some reptiles in the store for an event. She rented an alligator for the shoot, and the rest is photographic history. 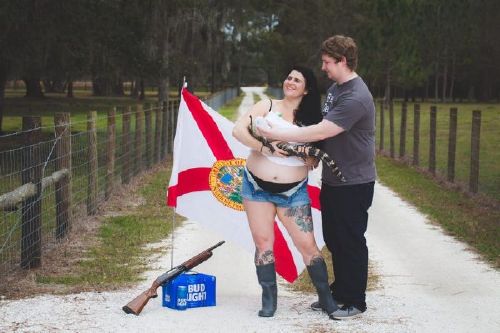 Saying she was going for a “swamp trailer-park chic” look, Tuttle is pictured in her maternity shoot cradling a baby alligator named Fred. On the ground next to her and her husband sits a case of Bud Light and a shotgun, along with the state flag of Florida flapping in the wind. Tuttle is wearing boots and unzipped denim shorts that are rolled down to reveal her pregnancy in all its glory.

“The shotgun’s a family heirloom,” she said.

While she knew the post would get lots of attention in Florida, Tuttle says she had no idea how viral the story would go. Her post elicited hundreds of comments, several of them not so appreciative of her edgy sense of humor. In a later Facebook post, Tuttle screen-shotted several critical remarks from commenters who didn’t quite get the joke.

“So sad that a photo like this represents maternity this way,” one commenter said. “God she is garbage huh? I feel baby for her baby,” another wrote.

Tuttle, who is due March 6, says she anticipated some pushback.

“I kind of expected a lot of people wouldn’t get the joke. It’s fine,” she said. “For the most part ppl are like, oh my god, this is satire.”