A Florida woman is facing a number of charges after she threatened a sheriff’s deputy with a visit from the KKK while she was being arrested, according to the Volusia County Sheriff’s Office.

Volusia County sheriff’s deputies were dispatched to an address in Deland, Fla., in response to a disturbance on Thursday at 11:50 p.m. When they arrived at the scene, they made contact with a driver who had her car’s headlights while reversing into a property.

The deputy was able to detect the odor of alcohol on the driver, 53-year-old Julie Edwards, Orlando news station WFTV reported.

Julie Edwards allegedly told a black deputy in Deland, Fla. that the KKK would burn a cross on his property. 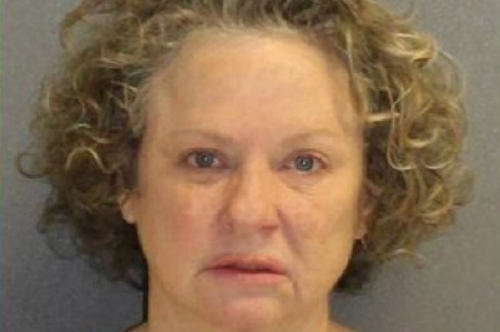 Edwards was handcuffed by the responding officers after she refused to provide a breath sample. According to the arrest report, Edwards dropped to the ground and refused to get back up, ignoring the officer’s commands. WFTV reported that the officer had to receive assistance from another deputy to get Edwards back on her feet.

While the deputy, who was black, filed the paperwork, Edwards told him the “Ku Klux Klan would be seeing him and burning crosses on his property.” The arrest report also shows that Edwards used a racial slur in regards to slavery.

Edwards was taken into custody at the Volusia County Jail on Friday and has since bonded out, according to records. She faces preliminary charges of driving under the influence, prior refusal to submit to testing, as well as making a threat against a law enforcement official and resisting an officer without violence.