A former Dallas Fire-Rescue (DFR) firefighter has been arrested and charged with attempted invasive visual recording for allegedly planting a hidden camera in a fire station bathroom. The matter is currently under investigation.

Another firefighter’s wife first discovered the device, which doubles as a phone charger, on Thanksgiving Day last year when she removed it from the downstairs bathroom at DFR Station 11 to charge her phone upstairs.

Her husband was reportedly the one who first realized the charger actually also functioned as a camera, but he didn’t come forward at the time because he was new to his job and didn’t want to draw attention to himself, according to an arrest affidavit obtained by CBS affiliate WFAA.

Two months later, Capt. Daniel Puente discovered the camera and started questioning firefighters to find its owner. That’s when Craig Lawrence, the firefighter accused of misconduct, allegedly “exhibited nervous behavior” and ultimately admitted on Jan. 21 that the USB device was his, though he claimed he didn’t know it doubled as a camera. 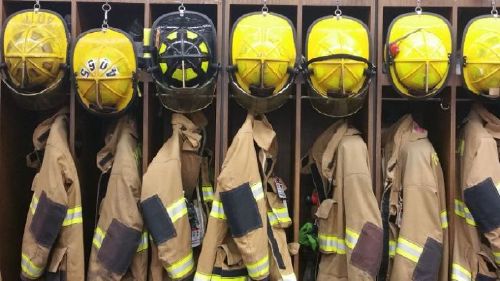 A former firefighter is under investigation after a camera that doubles as a phone charger was found in a fire station bathroom.

According to the affidavit, Lawrence began to break down later that day, telling Puente, “I’m about to lose everything. I’m going to jail. I’m going to lose my job and my kids, my wife is going to divorce me.”

DFR spokesperson Jason Evans told WFAA in a statement that Lawrence was placed on administrative leave while police launched an investigation. But on Jan. 24, Lawrence resigned from DFR – where he had worked for five years – and started working as a full-time firefighter for the city of Wilmer, Texas.

Lawrence reportedly has a history of “sexually explicit behavior” at work, including telling sexually graphic stories, showing off sex toys and spending an inordinate amount of time on his laptop with the screen hidden, according to WFAA.

When questioned by authorities last Friday, Lawrence changed his story. He said he had purchased the camera to try to “determine who had been rummaging through his duffel bag at work,” according to the affidavit, and that it accidentally made its way into the bathroom. He denied planting the device himself. He also initially told police he didn’t own a laptop – but then later said his laptop had broken and that he’d thrown it away. Authorities were unable to recover any footage from the camera, as its memory card was damaged.

On Wednesday, Lawrence was booked into Dallas County Jail and charged with invasive visual recording, a class A misdemeanor. His new employers in Wilmer have placed Lawrence on administrative leave until further notice.

Lawrence’s alleged behavior has been condemned by Jim McDade, president of the Dallas Firefighters Association. “It’s absolutely inexcusable, and not forgivable at all,” he said to WFAA. “A station is where firefighters spend a third of their lives. It’s our home away from home, and we expect it to be able to be safe so we can bring our families here. This is not representative of who firefighters are and what we stand for.”

He did, however, praise the firefighters who reported the misconduct. “They did exactly what they were supposed to do,” he said. “They recognized it as a direct threat to their families and all of our employees.”