Willy McCue, 19, was hospitalized with the flu in early February that led to pneumonia and septic shock. A 19-year-old volunteer firefighter had to have both of his feet, one of his hands and all of his fingers amputated after a severe case of the flu led to a blood infection.

Willy McCue has been in critical condition for more than a month in Rockland County, New York, after being hospitalized with the flu.

The flu led to pneumonia, a lung infection, that resulted in septic shock, killing tissue in McCue’s feet and hands leading to the extensive amputations.

The former high school athlete has been showing signs of improvement in recent weeks but he may have several more surgeries in his future, according to a Facebook post from the New City Fire Department where he was a probationary firefighter.

The department has said that the probationary firefighter’s uniform and helmet will be waiting for him when he’s ready to come back to work.

In the meantime the community has rallied around the active teen to help him recover and adjust to his new life.

After McCue was hospitalized in early February he developed pneumonia, a common infection in flu patients that aren’t caught early enough.

The infection causes inflammation and swelling in the lungs as the air sacs fill up with fluid making it difficult to breathe.

He then developed sepsis, a life-threatening blood infection that kills 30 percent of patients.

Doctors had to amputate both of the volunteer firefighter’s feet as well as one of his hands and the fingers on his other hand. He is pictured right 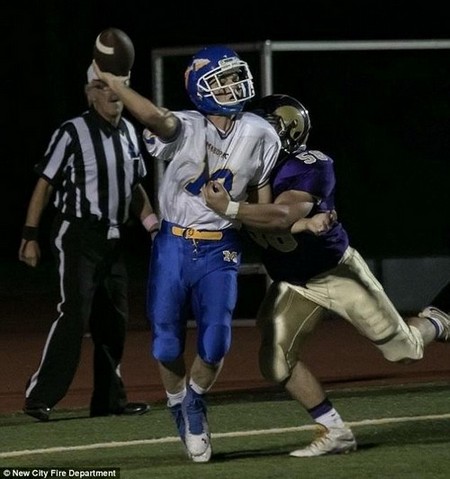 Sepsis occurs in response to an infection, commonly pneumonia, when chemicals released into the bloodstream to fight an infection cause inflammation throughout the body as well as critically-low blood pressure that can lead to organ failure.

It can also cause the blood’s clotting mechanism to go into overdrive which can create blockages in the blood vessels that inhibit the body’s ability to deliver oxygen and nutrients to certain parts of the body, specifically the extremities.

The lack of circulation can cause tissues to die, at which point they need to be removed.

In McCue’s case, doctors had to amputate both feet and one of his hands at the wrist and the fingers on the other hand.

He has also sustained severe tissue damage in one of his legs and organ damage particularly in his liver and kidneys.

McCue’s former football coach set up a GoFundMe page that has raised nearly $90,000 for his recovery as of Monday afternoon.

The New City Fire Department has said McCue’s uniform and helmet will be waiting for him when he’s ready to come back to work. He is pictured second from the left

The community has also planned several fundraisers for McCue including a dinner on April 8 where all proceeds will go to the family.

‘He joined the fire department just to give back to everybody,’ New City Fire Assistant Chief Richard Willows told Fox5. ‘That’s the type of heart he has.’

‘I’m hoping that they stay high and let him know that we are behind him with him through this whole process.’

Willows added, ‘As sad as he is, he’s in good spirits and just wants to get to rehab and get back riding the trucks – that’s what our goal is.’

McCue isn’t the only person to suffer from pneumonia-related sepsis this year.

In March a mother-of-six had to have her hands and legs amputated after what started as a common cold turned into life-threatening pneumonia and a blood infection.

Tiffany King, 38, was rushed to a hospital in Provo, Utah, in mid-January after waking up in the middle of the night with difficulty breathing.

She slipped into a coma and was diagnosed with viral and bacterial pneumonia that lead to sepsis – giving her a 15 percent chance of survival.

When she woke up from the coma at the end of January, she was told that both of her hands and both of her legs would need to be amputated.

Nearly two months later King is undergoing physical therapy and has her mind set on being able to walk down the aisle at her wedding in October.

Tiffany King, 38, caught a cold in Springsville, Utah, in January that led to viral and bacterial pneumonia and sepsis. When she woke from a coma her fiancé Moale Fonohema, right, told her she needed a quadruple amputation

In December a gym fanatic from Texas had all of his fingers amputated after complications from the flu.

Joei Smith had received the flu vaccine in November, but at the end of December he came down with severe flu symptoms that landed him in the hospital.

He ultimately developed pneumonia, sepsis and a kidney infection and narrowly avoided death.

However, the blood pressure drugs that saved his life cut off the circulation to his fingers, which have now been amputated, and his toes, which are set to be amputated in the near future.

CDC director pledges to bring opioid epidemic ‘to its knees’