There is broad agreement that fee-for-service reimbursement does too little to encourage the provision of efficient, high-value care. Consequently, Medicare and other payers are increasingly moving toward alternative payment models (APMs), which disrupt the fee-for-service system by incorporating quality and cost targets into reimbursement.

In the best-case scenario, clinicians will respond to APMs’ incentives by improving care coordination and integration, which may particularly benefit vulnerable populations with higher-than-average medical and social needs. On the other hand, there may be incentives for clinicians to avoid caring for these groups, who are at risk for high costs or poor outcomes in part because of factors beyond clinicians’ control. Understanding APMs’ potential consequences for vulnerable populations is critical if we wish to maximize benefits and reduce harms.

Vulnerable populations, such as people living in poverty and people with disabilities, disproportionately incur high health care costs and have poor health outcomes. Under fee-for-service reimbursement, there has been little financial incentive to focus on attracting or improving care for these groups, who often need low-margin services such as primary and behavioral health care.

Under APMs, by contrast, the highest-cost beneficiaries present the greatest opportunities for achieving savings, particularly in terms of modifiable costs such as emergency department visits for poorly controlled diabetes or hypertension, or unmet mental health needs. Consequently, APMs may encourage clinicians to coordinate care and pursue clinical innovations such as behavioral health integration for these groups. Such innovation could improve care and reduce disparities affecting historically underserved groups.

Empirical data, however, have been mixed. For example, in the Massachusetts Blue Cross Blue Shield Alternative Quality Contract, which replaced fee-for-service reimbursement with global payments tied to quality measures, quality improved the most for enrollees in areas with lower socioeconomic status, and disparities between these populations and more affluent ones narrowed.

Similarly, in the Physician Group Practice Demonstration, the precursor to the Medicare Shared Savings Program, people who were enrolled in both Medicare and Medicaid had the greatest reductions in costs and unplanned rehospitalizations. In the Medicare Shared Savings Program itself, the ACOs most likely to achieve shared savings were those with the highest proportion of dually enrolled or disabled people, but a recent study showed that reductions in hospitalizations accrued roughly evenly in high-risk and low-risk groups.

Yet APMs have the potential to be harmful. Current risk-adjustment methods are not sophisticated enough to reliably distinguish poor-quality care from high medical and social risk. Risk-adjustment models for readmission, for example, are notoriously poor, in part because they generally do not account for social factors, such as poverty, that are known to influence readmission.

Cost measures have similar limitations: research has shown that care for people dually enrolled in Medicare and Medicaid costs more than care for people who are not, even after coexisting conditions are accounted for, probably because of such factors as functional status and social support that are not included in current risk-adjustment models. As a result, hospitals or clinics with a high proportion of poor patients may lose money under APMs through no fault of their own. Particularly in programs with a high level of downside financial risk, there is a powerful incentive for clinicians to avoid providing care for high-risk patients, which could have meaningful consequences for access to care. 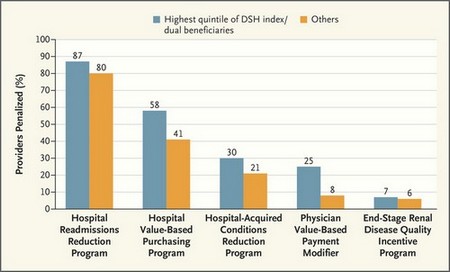 Effect of Value-Based Payment Programs on Providers That Serve the Poor.

For the three hospital programs, the Disproportionate Share Hospital (DSH) index, a measure of the proportion of care provided to low-income patients, was used to define the top quintile. For the Physician and End-Stage Renal Disease programs, the proportion of beneficiaries dually enrolled in Medicare and Medicaid was used to define the top quintile. Data are from U.S. Department of Health and Human Services, Office of the Assistant Secretary for Planning and Evaluation.

Indeed, a number of studies have demonstrated that value-based payment programs disproportionately penalize providers that serve poor people (see graph); such penalties could cause providers to avoid caring for these groups. As value-based payment and APMs begin to be used for physician reimbursement, these problems could be exacerbated, since there is greater economic segregation – and probably lower ability to bear risk – at the practice level than at the hospital or health system level.

APMs could also harm vulnerable populations if cost targets provide incentives for providers to cut back too far on services. This effect was a concern under 1990s capitation programs, which were seen as encouraging clinicians to withhold services from patients. Although the use of quality measures may protect against this reaction to some degree, such measures are neither comprehensive nor specific enough to do so in all instances.

For example, poor and minority patients are less likely than others to undergo percutaneous coronary intervention after myocardial infarction; if clinicians face the added pressure of financial incentives to reduce spending, access could be reduced even further for these groups. Such harms are insidious and, without a prospective effort to monitor and track such consequences, could easily be ignored.

I believe that APMs should reward clinicians for improving the things they can improve, while not penalizing them or holding them accountable for the things they can’t. Policymakers who wish to accelerate the growth of APMs while avoiding unnecessary harm to vulnerable populations and the clinicians who care for them might consider crafting payment models that adhere to a few key principles.

First, given the evidence that poverty and functional status, among other factors, strongly influence patient outcomes, APMs could include these factors in risk adjustment. Failing to account for them means underestimating the quality of care provided by clinicians serving high-risk populations and overestimating the quality provided by those serving low-risk populations; in many programs, the result is a transfer of money from clinicians caring for high-risk patients to ones caring for low-risk patients. Such redistribution is unfair to clinicians and patients and is not an appropriate path.

Second, in cases in which risk adjustment is inadequate to permit fair comparisons among providers, APMs could evaluate participants on improvement rather than solely on achievement. If one physician practice serves an affluent, low-risk population and another serves an impoverished, high-risk population, it may be infeasible to fairly compare the two groups’ admission rates for diabetes, given the limited information available in administrative claims data.

Both practices, however, could be rewarded for improving, and be adequately resourced and supported to do so. Such an approach could drive advances in quality without penalizing practices serving more complex populations and could be implemented within rulemaking rather than requiring legislation in many current APMs.

Under a proportional-improvement–based method, clinicians would have incentives to focus on patients whose conditions had the most room for improvement. Such a system would require a more sophisticated approach to quality measurement, but as we increasingly attend to population health and capture more data electronically, it is an essential and increasingly feasible proposition.

Fourth, if we truly want APMs to drive a focus on the most vulnerable among us, we should explicitly design them to do so. We could link payment to measures that examine access to care among dually enrolled beneficiaries, or outcomes specifically among high-risk populations, or reductions in disparities. Doing so would harness financial incentives to drive improvement in the populations that need it most.

The further we move toward APMs with financial incentives that encourage providers to innovate, address social needs affecting health, and fundamentally change the way we provide care, the better things will be for our most vulnerable patients.

While some organizations may be driven by a moral imperative to address social determinants of health, financial incentives could persuade organizations that might not otherwise do so to focus on their neediest clients. However, if we introduce such incentives without close attention to how APMs affect providers who serve vulnerable populations, we risk causing more harm than good. As APMs proliferate, we will have to consider these issues critically and track programs’ effects closely.

The illusion of time