She was given the heads up, along with the rest of the crew members, that American Airlines chairman and CEO Doug Parker would be flying with them.” data-Maddie Peters, a 28-year-old working on a recent flight from Phoenix to Dallas, NBC News reported.

She was given the heads up, along with the rest of the crew members, that American Airlines chairman and CEO Doug Parker would be flying with them.

An American Airlines flight attendant probably wins the award for “worst day at the office ever” when she accidentally dropped a tray of drinks on the airline’s CEO during a flight.

Unfortunately for the flight attendant, as she was carrying a tray of beverages up the aisle, a passenger in front of her backed up and “the drinks went flying.” 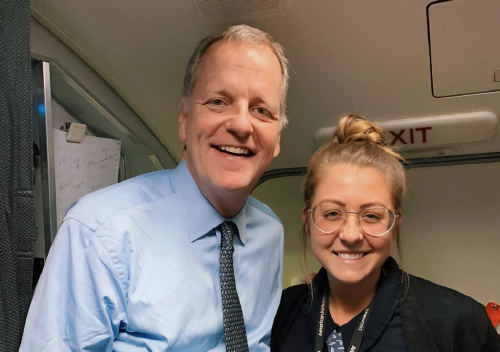 Instagram. “Guys I have worked for American Airlines for 4 years, and not once have I ever spilt a drink on a passenger,” Peters shared on Instagram.

“I WAS MORTIFIED. I wanted to drop dead right there in the aisle. (Like am I still employed?!) I’m still slightly traumatized/embarrassed,” Peters admitted.

Thankfully, Parker was understanding about the entire situation and even came back into the galley to joke with the woman who had the untimely butterfingers. “When he was getting off the plane he told me he’d never forget me…. guess that’s a good thing right?” Peters said.

Yahoo Lifestyle has reached out to American Airlines for comment and will update this post when we hear back.