The happy news was shared via a representative for the actress, shortly after the power couple appeared on the red carpet in New York to promote her new film, The Aeronaughts. 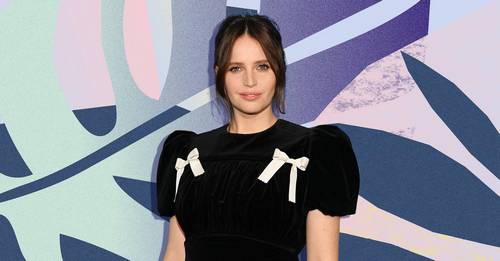 Dressed in a floor-length black velvet dress, Felicity had her bump on full show… much to the surprise of the rest of the world. Just two days earlier, she coyly covered up her stomach during an appearance on The Tonight Show With Jimmy Fallon.

The news of her pregnancy comes over a year after the couple wed in a private ceremony at Sudeley Castle in the Cotswolds last summer. Dressed in a stunning custom-made couture Erdem gown, Felicity said ‘I do’ to her director husband amongst a roster of A-list pals including Tom Hanks and Eddie Redmayne.

Felicity and Charles, who have been notoriously private about their relationship since they began dating in 2015, are yet to comment on the news. Meanwhile, we’ll be guessing who the godparents will be.

Speaking to Harper’s Bazaar in 2016, Felicity opened up about the prospect of having children alongside her thriving career. “Fortunately, I feel like we’re in a new era, where it is empowering rather than limiting to have children,” she said. “From what I can see from friends and relatives, women get stronger and more decisive from having children, they don’t waste their time doing things they don’t want to.”

It’s going to be an exciting year for the actress who is currently on a mammoth six month tour promoting her latest film with Eddie Redymayne. This is the second film the pair have starred in together following on from The Theory of Everything.

In 2020, Felicity will be starring in upcoming films Good Morning, Midnight and Last Letter from Your Lover in 2020.

Congratulations to the parents-to-be.

Katy Perry and Orlando Bloom Are Expecting Their First Child Together

Mindfulness can cure climate change anxiety and here’s how