Cancer-causing chemicals from weedkillers have been found in scores of food items you might stock your pantry with, FDA emails reveal.

Residue of glyphosate were found in products including granola, crackers and corn meal, according to emails obtained by The Guardian.

The chemical is the most commonly used herbicide in the world, especially in leading product Roundup, but it has been linked to disturbances to human sex hormones, cancer and miscarriages.

Roundup has been the target of hundreds of lawsuits filed by farmers ill with cancer and the FDA began investigating the weedkiller anew two years ago.

The alarming emails suggest that few foods may be untouched by the dangerous chemical.

Monsanto’s Roundup is the most popular commercial and consumer weedkiller, but FDA emails reveal that the agency’s scientists are troubled by the chemicals presence in foods

The newly-released emails are just the latest in the long saga of Monsanto’s weedkiller and its health risks to humans.

A brief history of the controversy seesaws between wide clearance for the company and sweeping warnings against its products.

The Environmental Protection Agency said Roundup might cause cancer in the 1970s shortly after it was introduced, but took back its decision in 1991.

Then the World Health Agency declared a glyphosate a ‘probable’ carcinogen in 2015, but the Food and Drug Administration (FDA) let Roundup and its potent ingredient stay on the market.

In 2016, the FDA announced that it would begin testing food for traces of glyphosate after the World Health Organization declared the compound a probable carcinogen.

That report was expected to be released late this year or perhaps early in 2019.

Now, the emails obtained by The Guardian through a Freedom of Information Act (FOIA) request reveal that the toxin may be a more pressing and widespread issue than previously thought.

The investigators and officials in the email chain seemed hard-pressed to find foods that did not contain at least traces of the pesticide.

According to The Guardian, FDA chemist Richard Thompson wrote in an internal email: ‘I have brought wheat crackers, granola cereal and corn meal from home and there’s a fair amount in all of them.’

Glyphosate was patented in 1970s and – coupled with Monsanto’s Roundup Ready soy bean seeds, which are genetically modified to tolerate the herbicide – has driven the company to the pinnacle of the weed-killing market.

Roundup herbicide is used on the majority of crops grown and sold in the US.

Its effectiveness against invasive plants is undeniable, but regulators and watchdogs alike have remained dubious of whether or not the chemical sticks around after it has done its job.

One 2014 report from the Government Accountability Office (GAO) suggested that there are trace amounts of glyphosate in 90 percent of the produce items it tested.

These levels were admitted low, but the government body expressed doubt that the FDA and USDA were aware of the contamination and recommended the regulators adjust their methodologies.

The GAO investigation found that ‘in 2012, FDA tested less than one-tenth of one percent of imported shipments’ of produce for dangerous herbicide residue.

Of the items that Thompson brought from home to test, only broccoli was free of the chemical.

In animal tests, glyphosate has been shown to increase the risk of kidney and pancreatic tumors among others.

Epidemiological studies have found higher rates of cancer in farmers that use Roundup, and hundreds of these growers have filed lawsuits against Monsanto.

Three hundred of these cases have been lumped together into a single trial, to be heard in June before California Superior Court Judge Curtis Karnow.

Earlier this month, the judge denied Monsanto’s attempt to keep testimony on glyphosate levels in food behind closed doors and out of the jury’s earshot.

What’s more, several studies – as well as the GOA report – have found that foods ingested by humans contain many times as much glyphosate as the lab animals that got cancer from it were exposed to.

Since The Guardian obtained the emails, the FDA has not offered any additional comments and Monsanto did not respond to Daily Mail Online’s request for comment.

Unless the agency says otherwise, a report on glyphosate cannot be expected for months, at least, and the Monsanto trail is scheduled to begin in San Francisco on June 18. 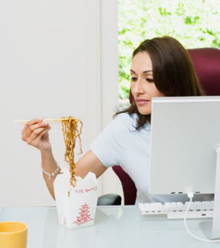 How to eat during the day to save health and save the figure?

Breakthrough prostate treatment rolled out on the NHS