A family is blaming youth football for the death of a 13-year-old boy who committed suicide a year after a particularly hard tackle.

In September 2015, James Ransom was playing offensive lineman for his middle school football team in Ladera Ranch, California, when his helmet collided with that of a boy from the opposing team.

It wasn’t until after the game that his father, Greg, noticed dried blood around his son’s ear. James didn’t complain about the incident and moved on.

But his family said his personality changed following that hit.

The younG boy attempted suicide three months after the hit and spent months in a mental institution. Then, in November 2016, he took his own life. 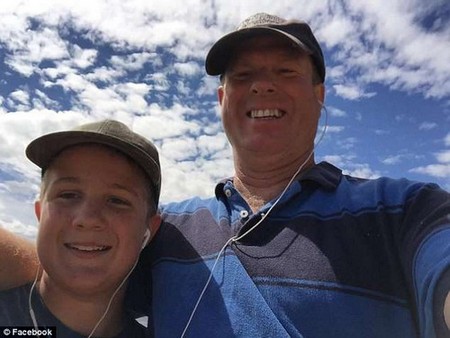 A California family is blaming youth football for the death of 13-year-old James Ransom (left, with father Greg) after he committed suicide a year following a hard-hit tackle 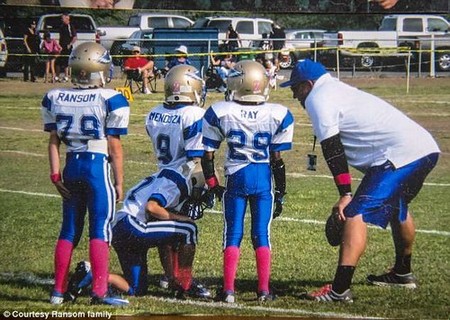 In September 2015, James (far left), from Ladera Ranch, was playing offensive lineman for his middle school football team when his helmet collided with that of a boy from the opposing team

Professional football has been plagued by controversy since the landmark study by Boston University in July 2017 that found chronic traumatic encephalopathy, known as CTE, in 99 percent of deceased NFL players’ brains donated to scientific research.

The Ransom family did not have James’s brain tested for CTE and, in fact, Greg said he barely knew anything about the disease.

However, scientists have uncovered more and more evidence in the last few years of how CTE can be brought on by youth football and show signs in pre-teen years.

Currently, the earliest evidence of CTE ever recorded was in an 18-year-old player, and prior to that it was in a 25-year-old.

A new study from Boston University published on Sunday found that those who began playing tackle football before age 12 showed cognitive and emotional symptoms associated with CTE an average of 13 years earlier than those who started after 12.

The study included 246 former amateur and professional football players and found that 211 were diagnosed with CTE after death.

Additionally, the study also said that for every year a player played tackle football under age 12, the onset of cognitive problems could be predicted by 2.4 years, and behavioral and mood problems by 2.5 years.

‘Youth exposure to repetitive head impacts in tackle football may reduce one’s resiliency to brain diseases later in life, including, but not limited to CTE,’ she said.

‘It makes common sense that children, whose brains are rapidly developing, should not be hitting their heads hundreds of times per season.’ 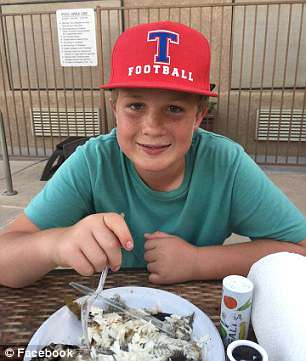 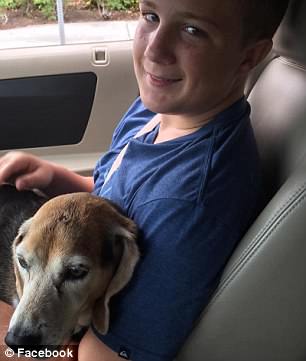 His family says his personality changed following the hit and James (left and right) suffered from short-term memory loss, mood swings, and erratic obsessive behavior. His doctor told his parents he had a concussion 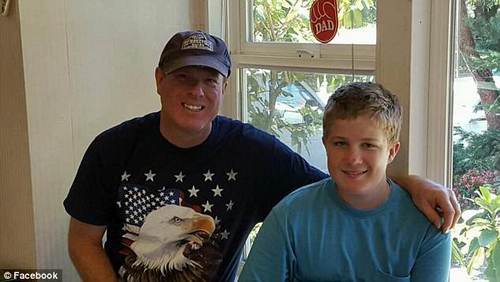 James began playing football at age 9 when his father (pictured, left, with James) signed him up for Pop Warner, a youth football organization

James began playing football at age nine when his father signed him up for Pop Warner, a youth football organization. Greg and Courtney said their son loved the game and would spend hours practicing and memorizing the playbook.

They said that following the hit, he almost immediately returned to practice. However, just a couple of days later, he began suffering from blurry vision, nausea and dizziness. His doctor told his parents he had a concussion.

A study released in 2017 and paid for by both NFLPA (the player’s union) and the NFL Foundation found linemen tend have the highest risk of brain damage because they receive the most helmet-to-helmet contact.

The couple said their son’s normally cheery disposition soon faded as he suffered from erratic tantrums, was unable to concentrate in school and then tried to hang himself.

He spent months at the neuropsychiatric ward at UC Irvine where he again tried to commit suicide by attempting to electrocute himself. 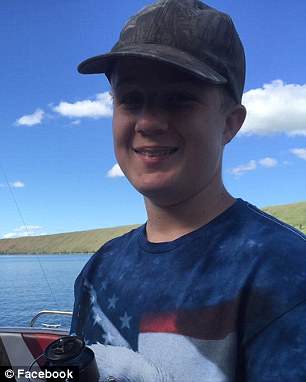 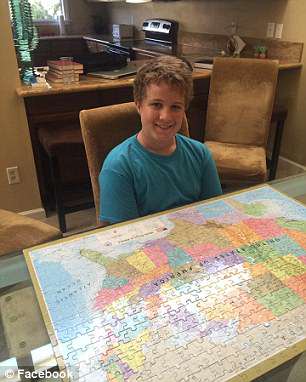 The couple said their son’s normally cheery disposition faded as he suffered from erratic tantrums, couldn’t concentrate in school and tried to hang himself. Despite months in a neuropsychiatric ward, James (left and right) committed suicide in November 2016

Last year, the family created the James Henry Ransom Foundation and held a 5K race for the adolescent mental and behavioral program at Mission Hospital, raising $35,000 (Pictured, James, foreground, with his father)

Doctors put him on anti-anxiety medication and antidepressants and soon the family says their son’s behavior seemed to improve. But, in November 2016, James took his own life.

Last year, the family created the James Henry Ransom Foundation and held a 5K race for the adolescent mental and behavioral program at Mission Hospital, raising $35,000.

Greg says he’s also planning a trip to Sacramento to lobby for the ‘Safe Youth Football Act’ which proposes to ban tackle football for children under 12.

It was pulled from the California State Assembly amid a lack of legislative support but Greg is committed to the change.

BRAIN INJURIES IN SPORTS: THE FAST FACTS ABOUT RISKS, TESTS, SYMPTOMS AND RESEARCH

As athletes of all sports speak out about their brain injury fears, we run through the need-to-know facts about risks, symptoms, tests and research.

1. Concussion is a red herring: Big hits are not the problem, ALL head hits cause damage

All sports insist they are doing more to prevent concussions in athletes to protect their brain health.

However, Boston University (the leading center on this topic) published a groundbreaking study in January to demolish the obsession with concussions.

Concussions, they found, are the red herring: it is not a ‘big hit’ that triggers the beginning of a neurodegenerative brain disease. Nor does a ‘big hit’ makes it more likely.

In fact, it is the experience of repeated subconcussive hits over time that increases the likelihood of brain disease.

In a nutshell: any tackle or header in a game – or even in practice – increases the risk of a player developing a brain disease.

2. What is the feared disease CTE?

Head hits can cause various brain injuries, including ALS (the disease Stephen Hawking had), Parkinson’s, and dementia.

But CTE is one that seems to be particularly associated with blows to the head (while the others occur commonly in non-athletes).

CTE (chronic traumatic encephalopathy) is a degenerative brain disease that is caused by repeated hits to the head.

It is very similar to Alzheimer’s in the way that it starts with inflammation and a build-up of tau proteins in the brain.

These clumps of tau protein built up in the frontal lobe, which controls emotional expression and judgment (similar to dementia).

This interrupts normal functioning and blood flow in the brain, disrupting and killing nerve cells.

Gradually, these proteins multiply and spread, slowly killing other cells in the brain. Over time, this process starts to trigger symptoms in the sufferer, including confusion, depression and dementia.

By the later stages (there are four stages of pathology), the tau deposits expand from the frontal lobe (at the top) to the temporal lobe (on the sides). This affects the amygdala and the hippocampus, which controls emotion and memory.

3. What are the symptoms?

Sufferers and their families have described them turning into ‘ghosts’.

4. Can sufferers be diagnosed during life?

No. While a person may suffer from clear CTE symptoms, the only way to diagnose their CTE is in a post-mortem examination.

More than 3,000 former athletes and military veterans have pledged to donate their brains to the Concussion Legacy Foundation for CTE research.

Meanwhile, there are various studies on current and former players to identify biomarkers that could detect CTE.