But how much do you know about what’s happening across the pond: who’s in the race, who might win and what the impact of Coronavirus will be?

This November, the United States of America heads to the polls to elect their next President. It could be a possible end to the presidency of one of the most divisive American leaders in history; it could also spell four more years of twitter-trigger-happy Trump.

Don’t sweat it. We’ve got you covered.

Ok, so what’s up with America RN?

Much like the rest of the world, America is in the grip of Coronavirus. In fact, it is currently the worst affected area with (at time of press) 53,934 cases confirmed by lab tests and 728 deaths. The government has just reached a $2 trillion aid deal, the biggest relief package in the country’s history, to help provide financial relief to those affected by the pandemic and most states are in various stages of lockdown.

If America’s major issue before now was that the president behaves like everyone’s offensive drunk uncle; now it is more concerned by the fluctuating reactions of said uncle. Trump has U-Turned constantly on the issue of Covid 19; from initially calling it the ‘China Virus’ (which many believe is a root cause of a spike in xenophobic attacks of Asian Americans) he then appeared to take the threat seriously when he shut down access to the country in mid March, but is now stating he wants American to “open up” again by Easter. He has claimed rising mental health problems and potential suicides if the US remains shut – despite experts refuting this- and he cited no scientific reason for the date other than: “I just thought it was a beautiful time.”

In the midst of all this, we have an election brewing…

How has Coronavirus affected the election?

All physical campaigning has stopped- from rallies to meet-and-greets, and the series of democratic primaries (state elections to decide who will run as the Democratic nominee for President) have been postponed and Alaska, Wyoming and Hawaii will be conducting their primaries entirely by postal vote. The big question, obviously, will be how long Coronavirus will last, and if major events in the election timetable will go ahead. The Democratic and Republican conventions, 13 July and 24 August, are mass gatherings where a candidate is announced for each party- their future hangs in the balance.

Is the virus bad news for Trump?

Old 2am-tweeter-himself was going to run a campaign based on just how Great he had Made America Again. But the pandemic means that angle is NSFW anymore. Coronavirus has hugely changed the perception of the president and the way he now has to campaign, with many Americans critical of his unstable and unrealistic reaction to the crisis. In contrast, his biggest threat, Joe Biden (more on him later) has come off as cool in a crisis, and is looking rather presidential… But, of course, there has never been an election in circumstances like these before. All bets are off.

Yes and no. Donald Trump was impeached for basically telling the President of Ukraine they could be best pals if he got the son of Joe Biden investigated for corruption. Everyone agreed that was bad – hence the impeachment – but no one fired him for it. But as Trump is a Republican, the Democrats, who brought the charge, couldn’t get the Republicans in the senate to vote for it.

Nonetheless, he will go down in the history books as one of only three presidents to have been impeached, alongside Andrew Johnson in 1868, and Bill Clinton in 1999. All three survived to remain in office. So, to clarify, you can be impeached but not kicked out of office. Impeachment is the political equivalent of being dragged to HR because everyone has agreed that the Weinstein impression you did for Sandra from accounting was NOT ok. You just don’t necessarily get the sack for it.

Ok so, who is challenging Trump in the election?

The Republicans have not really bothered to put anyone up for the job, as presidents very rarely get unseated in their first term.
Over on the Democratic party side (America is basically a two party system), we had just under 30 candidates who put themselves forward over the last year and it’s been finally whittled down to just two major front runners vying to be made the nominee for their party. The winner will go head-to-head with Trump.

Well, the main threat is Joe Biden, who was Barack Obama’s Vice President and was therefore one half of the most memeable political double act in history. Before he was professionally Obama’s best bud, he was a long standing senator for Delaware, with a great record within the civil rights movement. Okay, so he also has two failed presidential runs under his belt, but he represents a more moderate, traditional take and so now, many see him as the safest bet to beat Trump. 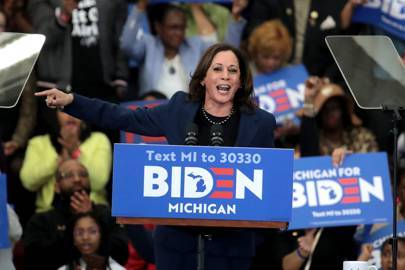 His major competition is Bernie Sanders, a democratic-socialist and Vermont senator, who is anti-establishment, wanting to rebuild the system in a fairer way. He wants free healthcare for all, a higher minimum wage and has a lot of passionate supporters – who “feel the Bern” (geddit?). Though Biden is currently in the lead, and polling at 52% over Sanders’s 32% average, Sanders is not to be discounted yet and has more than held his own in their one-on-one debates. The game is still on. 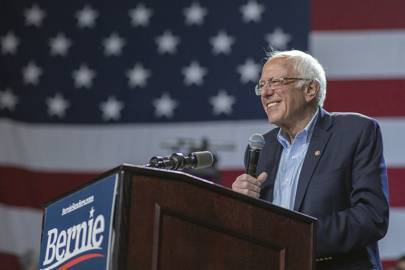 Tulsi Gabbard was the last remaining woman and person of colour in the race, before she dropped out on 19 March, but she did have a seriously dodgy background as part of an anti-gay advocacy group. Awks. 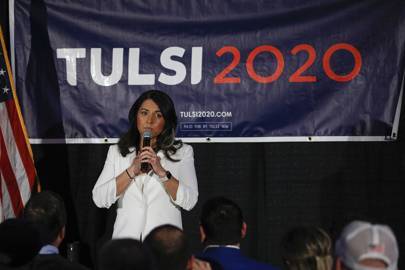 The real last hope was Elizabeth Warren, who ended her campaign on 5 March. The replacement for the Hillary Hope of 2016; she pinky-promised little girls that they would get to see a female president in their lifetime, she walked on stage to Dolly Parton’s 9-5, she famously said “I’ve got a plan for that” to most major issues facing America, from rebooting the economy to affordable healthcare for all. The senator and former Harvard Law professor ran on a promise to make life easier and fairer for everyday Americans, and she had a super cute golden retriever called Bailey. She will be missed.

Yes, but the 2020 race to be the Democratic nominee has been the most diverse yet; with more female candidates and candidates of colour than usual. Like, for example Cory Booker, am African-American senator from New Jersey who we were mostly obsessed with because he’s vegan, dating Rosario Dawson (WHAT a First Lady that could have been) and said this about gay rumours: “I hope you are not voting for me on the presumption that I am straight.”

There was Pete Buttigieg, known as ‘Mayor Pete’ because he was the former mayor of South Bend Indiana and also because literally no one could pronounce his last name. He was one of the youngest in the race, at 38, and the first openly-gay candidate to ever run for president. He made it pretty far- only dropping out this month, meaning we’ll probably hear a lot more from him.

There were also some fantastic female candidates in the running, from Californian Senator Kamala Harris, who de-li-vered on the debates, but dropped out in December last year due to limited funds, to Amy Klobuchar, a Minnesotan senator who made it to March before dropping out to endorse Biden.

What are all these ‘primaries’ that are happening?

Welcome to the complicated American political system. Before the election can go ahead, each party has to pick its candidate. It’s assumed that Trump will run for the Republicans, because they’ve spent too much money on MAGA hats to back out now, but the Democratic nomination is still up for grabs. What we’re seeing right now is the long process of choosing the right person for the job. This involves a year of campaigning, lots of exciting TV debates and then, what has been happening over the last few months, the primaries. These are mini elections held in certain states, where you vote for the candidate you want. The winner is announced at the Democratic National Convention which – at the moment- is still scheduled for 13 July. The likely outcome is a Biden nomination.

So, Biden vs Trump…who should win?

It is all to play for and proving impossible to call. Trump still has a lot of support and Biden may not be the best match for Trump’s…irregular debating style (shouting and talking over people, basically). However, though Biden doesn’t have his own range of trucker caps, he has a strong record and cross-party appeal. He also stands for improving healthcare in America, an issue which has become massively important during Coronavirus where the cost for a test package, isolation and doctors appointment can reach $1331 per person.