The Chair is already the most-viewed programme on Netflix, just six days after it was released. There are a few reasons for this, but the fact that it stars Sandra Oh, a.k.a. Eve Polastri in hit series Killing Eve is definitely up there.

This time, rather than trying to out international assassins, Oh is trying her hand at comedy, and it’s safe to say she’s not a one-trick pony. For the full plotline and everything you else you need to know about The Chair, read on….

What is The Chair about?

It’s been described as a ‘dramedy’ (that’s comedy and drama), as it follows Dr. Ji-Yoon Kim (played by Oh), as she navigates her new role as the chair of a failing English department at Pembroke Unversity. She faces a host of challenges, particularly as she’s the first woman to head up the department, but thankfully, she has witty, no-nonsense Professor Joan Hambling (played by Holland Taylor) to guide and support her as her BFF.

It’s a six-part series, with each episode lasting 30 minutes. 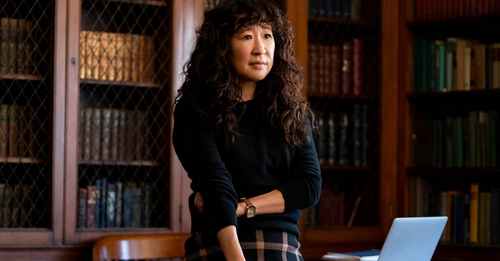 In a teaser clip about the programme, Oh said: “The Chair is really about the present moment. With all the things that I think everyone is going through, and everyone is more conscious about. Patriarchy, sexism, ageism, what it is to be a single mum, stuck between two cultues, and it’s all a comment.”

Who’s in The Chair?

Oh sits at the helm of the cast, alongside Holland Taylor, who takes on the role of Professor Joan Hambling, who becomes Ji-Yoon’s ally as a straight-talking academic in the same department of the University.

When is The Chair out?

Is there a trailer for The Chair?

There sure is. A teaser trailer was released in June, but a full-length version is now available to give you a better idea of the plot.

What have people said about The Chair?

Unsurprisingly, fans have gone W.I.L.D. for the show. Several have taken to Twitter to share their views, and here’s what’s been said.

Holy shit, #TheChair on Netflix is one of the most hilariously traumatic things I’ve watched in a long time. There’s a reason why most of Academic Twitter is glued to it this weekend. So much cringe. So much feels. (Also, the world is burning.)

yes I binged the entirety of Sandra Oh’s new Netflix show “The Chair” this morning, and yes it’s fantastic. only six 30-minute episodes, so you have no excuse. you’re welcome

Sandra Oh always understands the assignment. This woman is so brilliant in everything she’s in and I’m loving #TheChair on Netflix.