When the Duke and Duchess of Sussex announced they were stepping back as senior royals, chat and comparisons between Meghan and Harry’s mother reignited.

Meghan Markle and the late Princess Diana have many things in common, from a love for Prince Harry to a passion for philanthropy.

In a statement last year, the Prince compared the tabloid press’s coverage of his wife to the way in which his mother was treated. At the time, Prince Harry said that the ‘ruthless campaign’ against his wife was ‘history repeating itself’, adding: “I lost my mother and now I watch my wife falling victim to the same powerful forces.”

And it seems that perhaps Meghan herself sees a comparison with her late mother-in-law, with royal fans noting Meghan paying a few subtle tributes to Princess Diana. 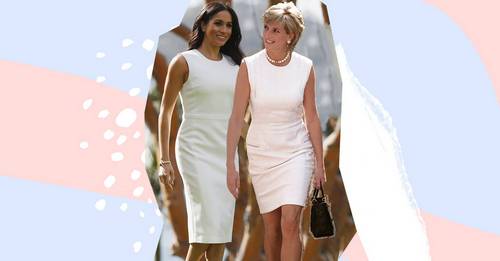 Indeed, in an interview to mark their engagement, Meghan spoke of the importance of remembering Diana. Gesturing to her engagement ring, she said: “I think everything about Harry’s thoughtfulness is – and the inclusion of that and obviously not being able to meet his mum it’s so important to me to – to know that she’s a part of this with us. And I think in being able to meet his aunts and – and also like Julia and just different people who were so important to his mum, I’m able to, in some way, know a part of her through them and of course through him. And it’s – it’s incredibly special.”

Harry added: “It is days like – days like today when – when I really miss having her around and miss being able to share the happy news. But you know with the ring and with everything else that’s going on I’m sure she’s …” “She’s with us,” added Meghan.

On her wedding day, Meghan included forget-me-nots and white roses from Princess Diana’s memory garden, in her wedding bouquet. She also plumped for the Princess’ stunning emerald cut aquamarine ring on her finger at her evening reception at Frogmore House.

To celebrate her first US Mother’s Day as mother to baby Archie, Meghan’s Instagram post of mother and son posing against a backdrop of forget-me-nots (Princess Diana’s favourite flowers), poignantly made reference to Diana: “Paying tribute to all mothers today – past, present, mothers-to-be, and those lost but forever remembered. We honour and celebrate each and every one of you.”

As well as the more obvious references, Meghan has also taken sartorial inspiration from Diana, who was recognised globally as quite the style icon.

From her trusty tuxedo dresses and netted fascinators to her penchant for colour blocking, we celebrate all the times Meghan Markle paid sartorial tribute to her late mother-in-law.