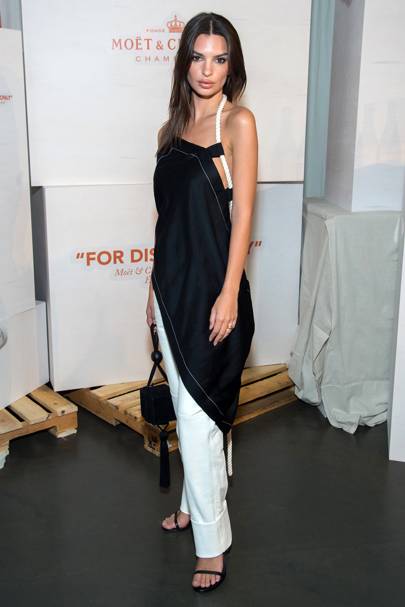 Emily proved that black and white worn together can look far from boring with this roped asymmetric top and white trousers. Monochrome magic! 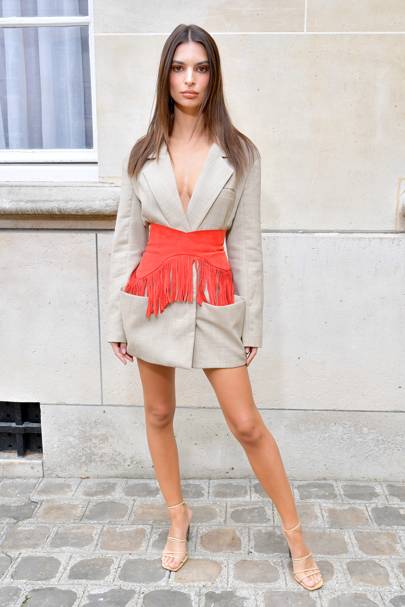 Emily gives a lesson in how to add a pop of colour and a flattering accessory to an otherwise neutral ensemble. 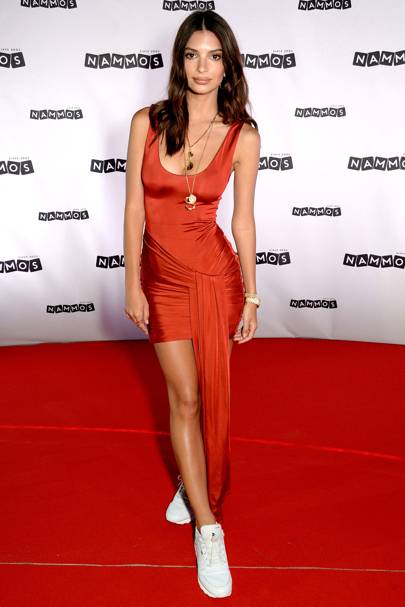 A silk scooped neck, slinky red dress and Reebok trainers on the red carpet? Only you, Emily. 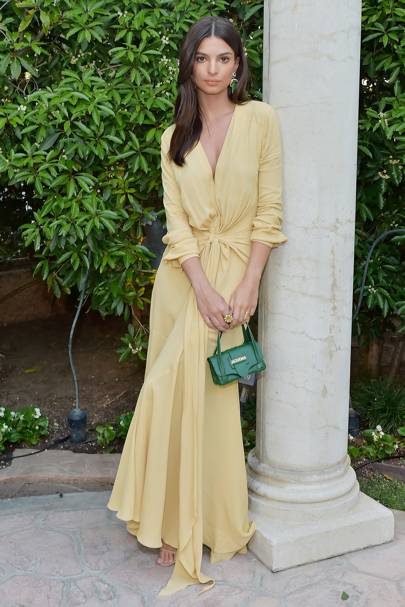 Emily looks mellow in yellow at The Daily Front Row’s 4th Annual Fashion Los Angeles Awards at Beverly Hills Hotel. We love the pop of colour she offers via her handbag. 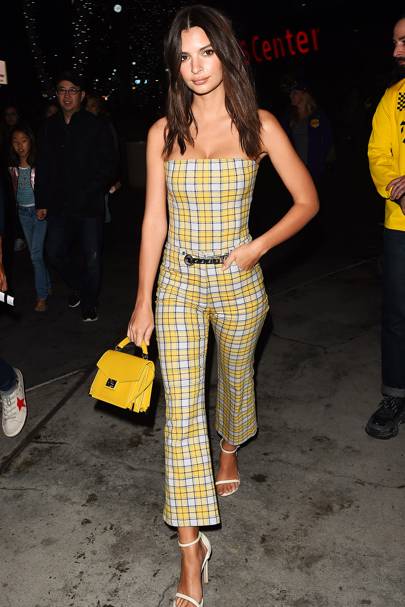 Emily channelled Clueless in this yellow checked kick-flare jumpsuit which she wore out with white, strappy heels and a mini bag. 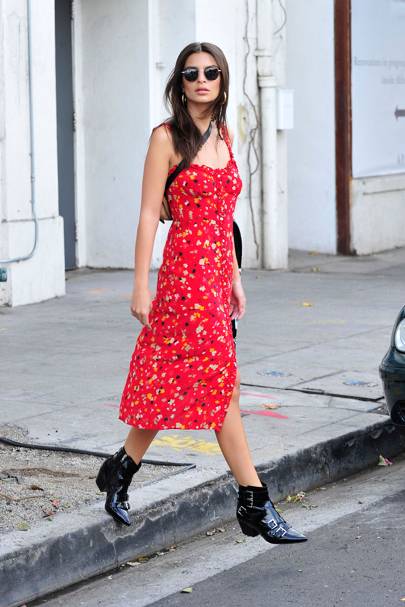 Out and about, Em looked chic in a Realisation Par dress (which you can find here) and ASH boots. 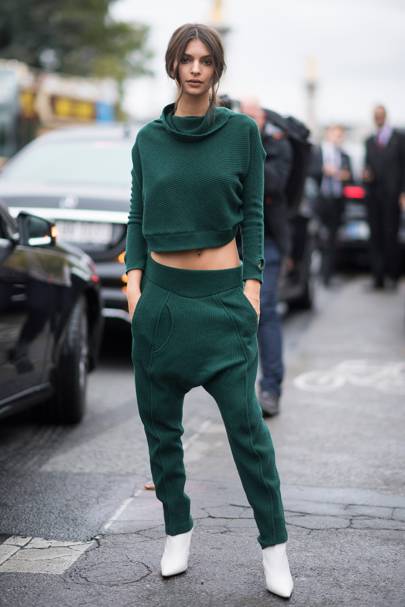 To the Paco Rabanne show as part of Paris Fashion Week, Emily opted for a Rabanne knitted co-ord which featured drop-crotch trousers. Yep, she’s the only woman in the world who can pull this off. 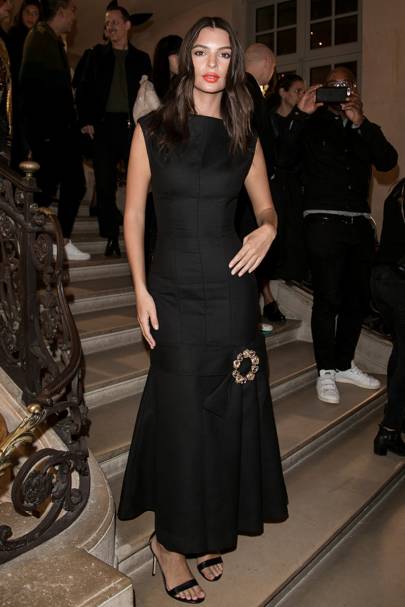 At the Jacquemus show as part of Paris Fashion Week, Emily looked like a lady of elegance in a black fitted dress complete with a chic brooch detail. 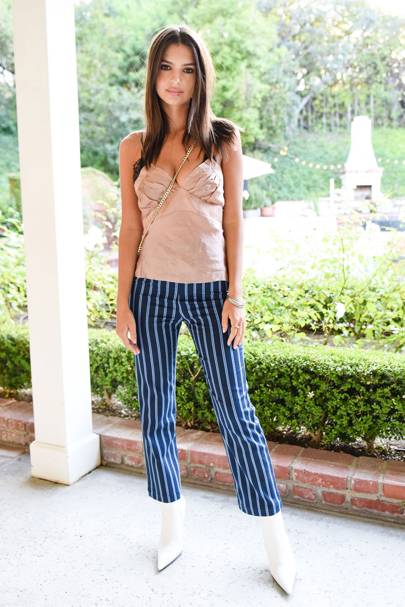 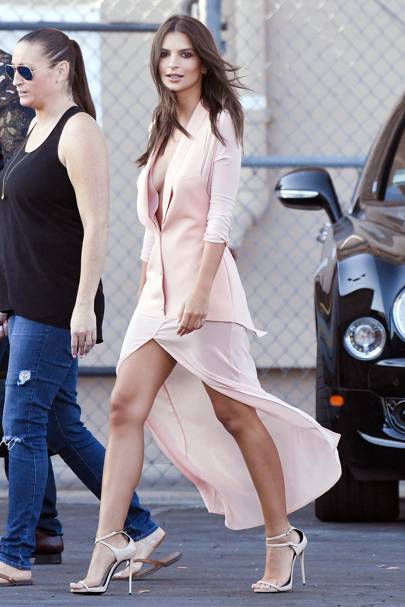 For an appearance on Jimmy Kimmel Live, Emily went pretty in baby pink. 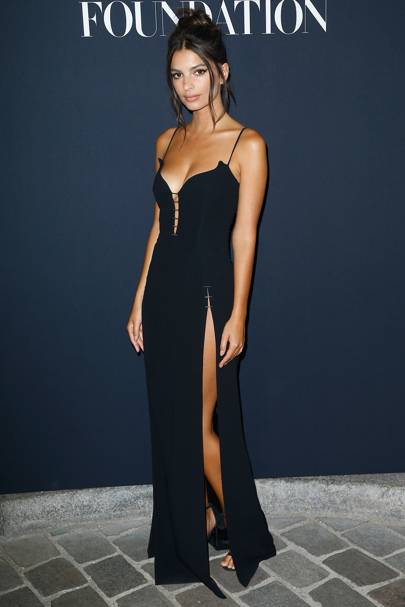 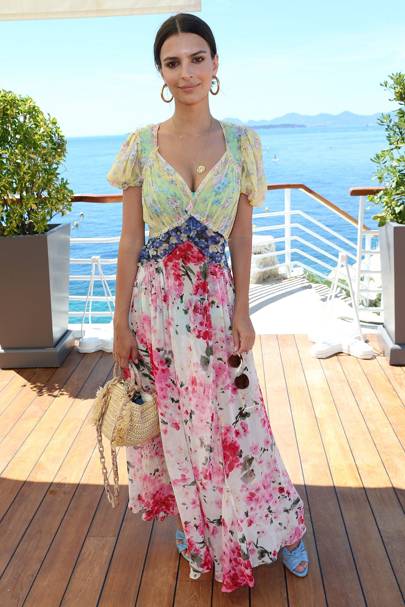 At Cannes 2017, Emily looked stunning in a floral dress during the day. 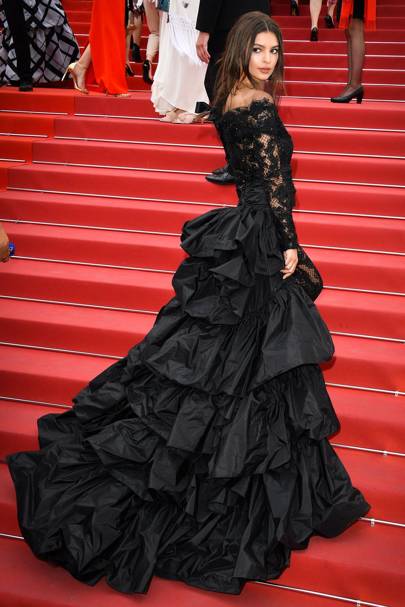 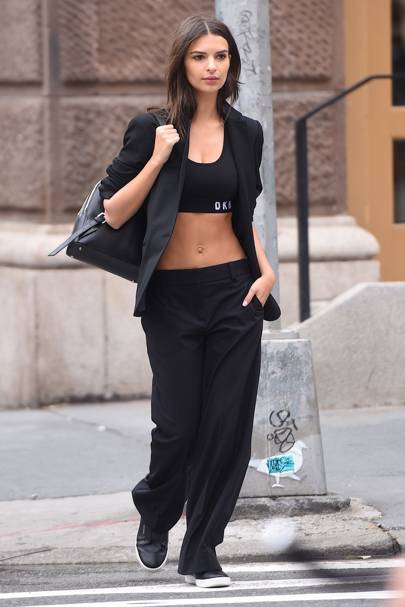 While on a shoot out in New York, EmRata showed off her best feature: her enviable stomach. 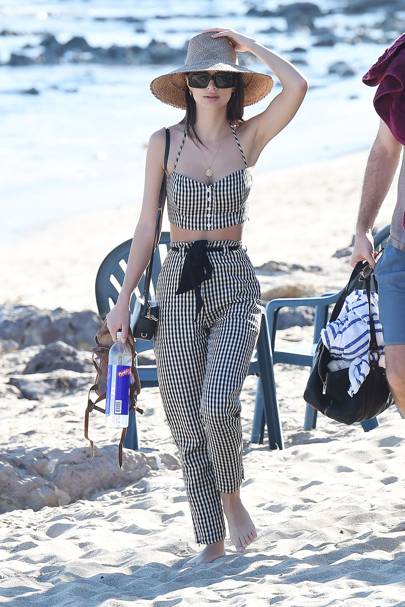 While out in Malibu (where the weather was apparently much warmer – jels) Emily Ratajkowski went for a stroll on the beach and gave old Hollywood vibes. We love the co-ord, huge hat and sunnies. 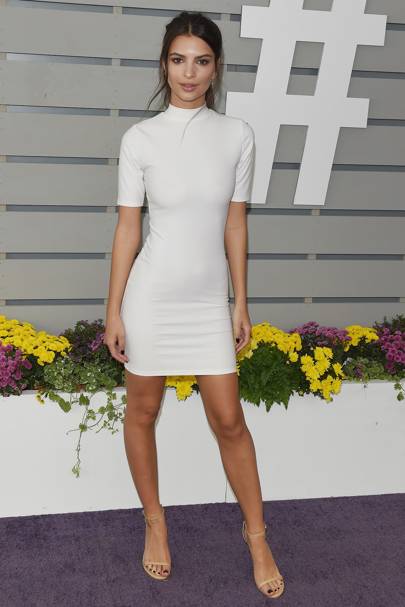 Emily Ratajkowski wowed at an event in LA, keeping it simple in a white dress. 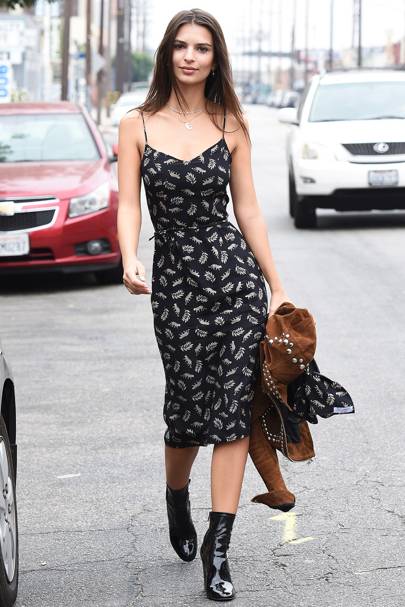 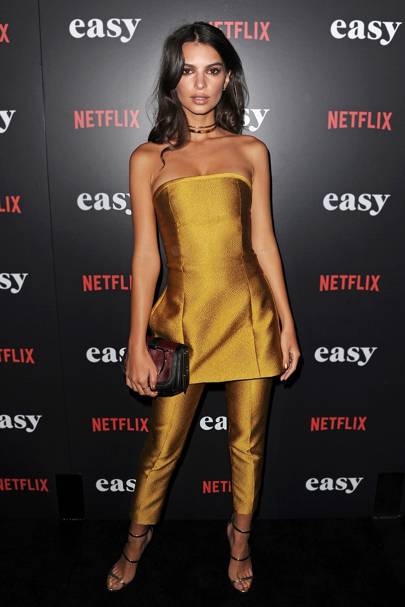 Just stop it, Emily Ratajkowski, just stop it. The model looked typically stunning at a screening of her Netflix show, Easy, wearing gold metallic dress over matching trousers. Her gold accessories (specifically the choker) set the whole thing off. 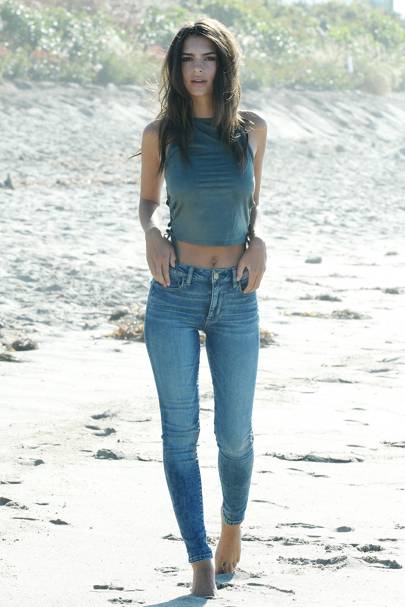 We want/need to think that this picture is being taken as part of a campaign, because frankly this is just too sexy for any ordinary daily scenario. 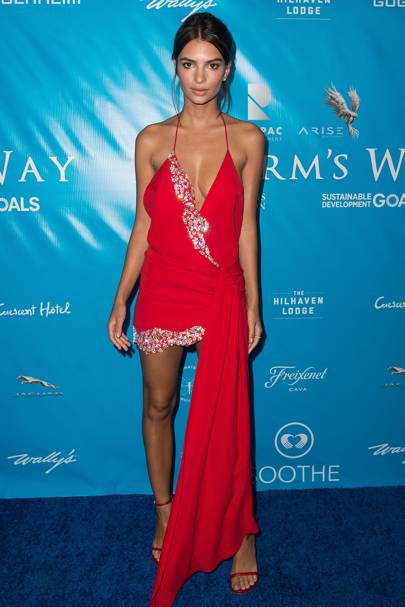 If we had a body like Emily Ratajkowski, we’d probably wear a slinky red dress as well.
The model turned actress arrived at an event honouring UN Secretary-General Ban Ki-moon in Beverly Hills, and she opted for a super slinky dress by Alexandre Vauthier. 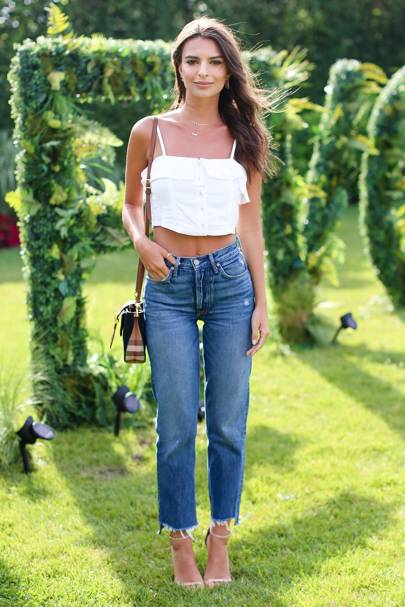 Who doesn’t want to look like this in jeans and a vest?! 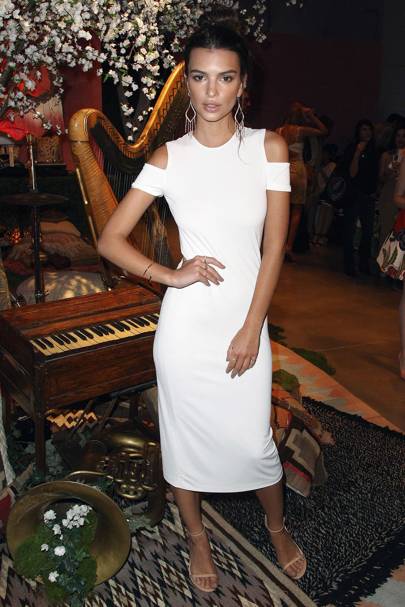 Emily has made us want to run out and get a white midi dress immediately. She’s also giving a nod to the cold-shoulder trend. Go Emz. 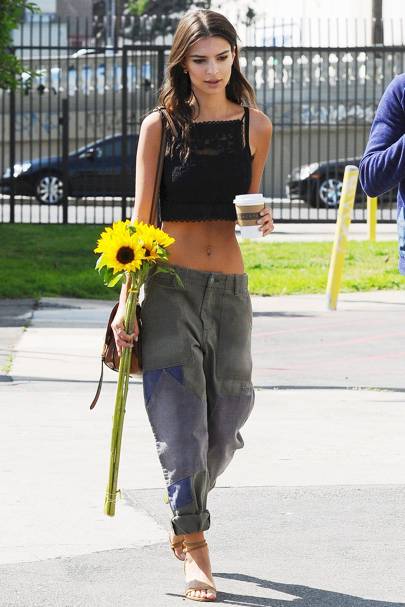 Goals.
We wish we looked this good carrying a sunflower with our stomach out. Amazing trousers, too. 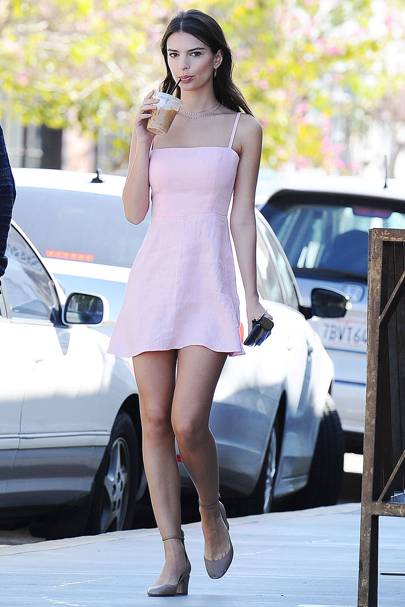 Emily looked spring-ready as she wondered around LA in a baby pink mini dress and a pair of cute sandals.

Em Rata’s Andrew Gn dress is picture perfection. She teamed the dress with a pair of stunning Beth Miller earrings.

Emily rocked a perfect brown leather dress and pointed nude shoes while at a lunch at New York Fashion Week.

The beautiful star rocked a cool white co-ord while hanging out in New York City. We have slight ab-envy…!

Emily appeared at the Topshop dinner for Ciara during New York Fashion Week in a pair of checked trousers and cool neutral jacket.

Emily looks casual and utterly gorgeous while out and about in New York City. We especially love her cute studded shoes… ankle boots aren’t just for winter!

To celebrate the opening of Primark in the States, Emily Ratajkowski headed to the launch party in New York looking smokin’ hot in her Primark crop top which she teamed with a Primark pencil skirt, and Giuseppe Zanotti strappy sandals.

Yes, there may be a touch of the ‘Angelina Jolie right leg’ here, but Emily Ratajkowski is still killing it at the LA premiere of her movie, We Are Your Friends. Showing off her uh-mazing figure (and yes, those boobs are real so don’t be hatin’), she wore a blush Maria Lucia Hohan gown teamed with Jimmy Choo shoes. Beaut!

Olive green isn’t the sexiest colour in the spectrum, but you might disagree now that you’ve seen it on Emily in this Solace London look. From the front, you might think that it’s a co-ord, but it’s actually a jumpsuit, and we love the cut outs, culotte trousers and the colour. She completed her look with Stuart Weitzman Nudist sandals

A neutral-hued look would be dull on some, but on Emily Ratajkowski, not so much! Her Atea Oceanie bodysuit teamed with her Brunello Cucinelli suede skirt and Sophia Webster sandals screams class.

For the London premiere of We Are Your Friends Emily Ratajkowski literally shined in her shimmery blue gown by David Koma. Excellent choice if you ask us. We love the illusion panels that contour Emily’s figure and the all-over sequins which both razzle AND dazzle.

Off-duty Emily is as good as on-duty Emily. This is so not fair. And she does geek chic well – is there anything Ratajkowski can’t do? Answers on a postcard. P.S. We’re now on the hunt for these Frame Denim ‘Le Skinny de Jeanne’ jeans.

YES. 1000 percent yes. This Balmain frock divided opinion, but we’re just gonna tell it like it is: The dress is amazing. The jaw-dropping choice brought the disco to the red carpet, and when is that ever a bad thing?

A Zimmermann polo neck dress was the look of the day for Emily Ratajkowski. Naturally she teamed her comfy knit with a pair of sexy thigh-high boots. Excellent choice.

Even when she’s just hanging out in New York, she looks insane. Emily was snapped going out for dinner in NYC showing off her toned stomach in a crop top and leather mini skirt.

Even when Emily Ratajkowski wears all-black, she still looks fabulous. How the hell does she do it? We look like we’re off to a funeral.

For the 2015 Tony Awards, Emily Ratajkowski stepped out onto the red carpet in Marc Jacobs, one of her favourite designers.

Emily Ratajkowski played herself in the Entourage movie – surely that’s a sign you’ve made it!? Here she is at its LA premiere, dressed in Zuhair Murad. We’re really liking the romantic goth look.

At the Samsung Studio launch event in Los Angeles, Emily opted for a bustier top tucked into a statement pair of coral trousers. Her traffic-stopping trousers are by Cédric Charlier and we love them.

Emily Ratajkowski isn’t afraid of colour. The pretty brunette kept it chic and stylish in a blue mini dress by Vionnet. Very pretty – but can we just stop and take a moment to appreciate that Paula Cademartori ‘Cocca’ clutch bag. Divine!

A strong beauty look from Emily. The starlet looked seriously gorgeous at the Tom Ford show in Los Angeles. We might practise this pose next time at the weekend…

She can do va-va-voom, and she can do low-key. That’s it, is there anything she can’t do? 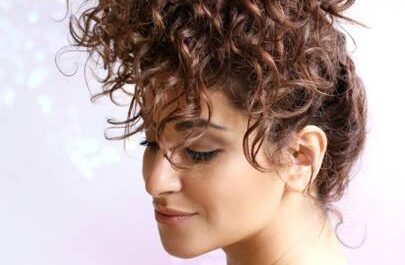 Having rogue body hair, recurrent thrush and grey hairs is just part of being a woman – and it’s so empowering when you accept that