I have three children. My son is the oldest, and behind him are two daughters, ages 9 and 4. I’ve struggled with anxiety and depression most of my life, but I’ve never told my kids about it.

In fact, I try not to tell anyone – because when I do, they tell me they’re sorry and then quickly change the subject. Or they tell me about a friend or family member who struggles with mental illness and then make recommendations as if they’re some kind of expert.

Or they go on about how mental illness isn’t actually a thing. Every once in a while, someone will tell me that they have a similar problem. But regardless of the reaction, one thing is universal: whenever I discuss my mental illness with someone, they look at me differently, and that’s the last thing I want for my children.

My 12-year-old son was scheduled to go on his first overnight scout camp. He looked up at me with these soft, nervous blue eyes and asked if I would go with him. He was frightened to go alone, just as I was the first time I went camping without my parents. And I wanted to go, I really did. I love spending time with my son. But for the past several nights, I’d been having panic attacks. They usually happen while I’m in bed, when I’m not awake and not yet fully asleep. The feeling is hard to explain – it’s as though something jumps out at me – but I end up sitting in bed, cold, with butterflies in my stomach. Then I spend the next several hours in a state of nauseous, painful dread. 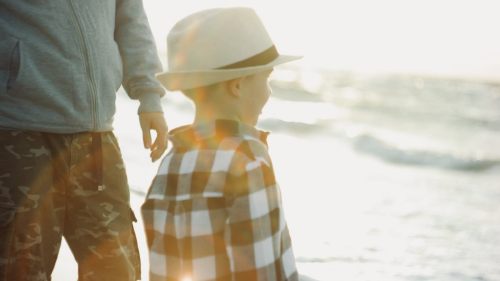 Sleeping in a tent after several nights battling anxiety felt like too much. But as difficult as it was to tell him I couldn’t go, it only got harder when he asked why.

Whenever I discuss my mental illness with someone, they look at me differently, and that’s the last thing I want for my children.

So I’ve never told them that sometimes I wake up panicked and in a cold sweat, and then throw up because of all the knots in my stomach. I haven’t told them about all the medication, or the occasional thoughts of suicide, or how sometimes the anxiety carries over to the next day, causing me to be short-tempered with everyone, including my family. I’ve never told them that at times I’m not the father I want to be. When things are really bad, I don’t take the time to explain why I want my son to clean his room or why they can’t have another snack. I just demand it, like my father did, and I hated that about him. Other times I go an entirely different direction and become too lax with my children. I give in to their demands – screen time, candy, skipping homework, whatever it takes – so they’ll leave me alone. Then there are the moments when I lock myself in my bedroom, eyes closed, desperately trying to get a handle on it.

I’m not like this all the time. Most days I’m fine. It’s only occasionally that my anxiety and depression really take the wheel.

I watch my children closely, keeping an eye out for any sign that they’ve inherited the issues I struggle with each and every day. I want to be able to guide them if they do, and yet I don’t want them to know about my own battles. Perhaps this is because I’m a man, and I don’t want my children to see me as weak. But the funny thing is that people living with mental illness are far from weak. I shouldn’t have to feel that I’m somehow more fragile or that this is something I need to bury. It’s just that for so long I’ve been made to feel that men should be strong, that I should be able to just will this away. But I can’t, and that feels shameful to me.

I thought about all this as I looked at my son that day. I know I should try to normalize mental illness and that there’s no better place to start than at home. But instead of telling him how anxious I felt about spending the night in a tent, I reminded him how much fun he would have, offered to buy him some extra treats to share with his friends, and even let him take the Nintendo Switch – something I would usually never do.

He smiled and gave me a hug, and together we packed his camping bag, him bursting with questions about what to expect and me filled with regret that my anxiety was, once again, holding me back.

Here’s What’s Going On, According to a Doctor