The episodes have largely revolved around the legal aftermath of Meredith’s insurance fraud, and the situation quickly escalates once she is imprisoned for missing her court date. Luckily, Meredith is released at the end of this season’s Halloween episode, “Whistlin’ Past The Graveyard.”

But at least a handful of fans on Reddit believe that trouble is coming – and it involves Meredith’s former cellmate, Paula.

What a ride season 16 of Grey’s Anatomy has been so far! Amelia and Link are having a baby, Miranda is pregnant, Alex is chief of a run-down hospital, and Meredith is a criminal.

1. Paula Is Suspicious From the Get-Go

In jail, Meredith and Paula bond over how each of them ended up there. Meredith’s privilege is checked once Paula tells her about the struggles she’s facing as a single working mother and the dire situation that landed her in prison.

Some fans are skeptical of Paula’s story and don’t think it’s a coincidence that she waits to disclose this info until learning Meredith is well off and a social justice advocate. The timing of Paula’s backstory is suspicious, and the entire thing could be a lie in order to gain sympathy from Meredith. 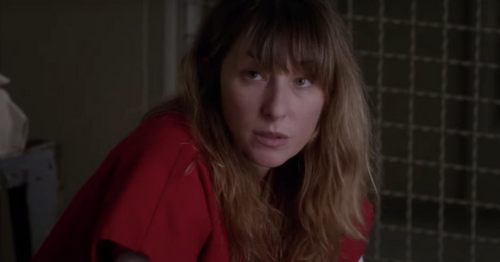 2. Her Reaction Is Bizarre

At the end of the episode, Meredith is shown leaving her jail cell and going home to her kids (hilariously still wearing her inmate uniform). She’s not the only one who gets out of jail that night, since Meredith generously pays Paula’s bail.

This act of kindness on Mer’s behalf has some fans on edge. Paula’s expression as she exits prison is deadpan, which seems like an odd reaction from someone who has unexpectedly been released from jail. Perhaps she’s been expecting this to happen because of her conversation earlier with Meredith. Now that she’s out, maybe we’ll learn that Paula isn’t actually who she says she is.

Grey’s Anatomy sometimes uses characters with minor storylines as devices later on to unveil a bigger plot twist. No one expected Gary Clark to come back in season six and commit a mass shooting at the hospital after his wife’s death, remember? It’s one of the most traumatic moments from the show, and the writers could make this storyline with Paula the next hurdle Meredith is faced with later on.

Whether this theory is on the right track or completely wrong, fans are happy that Meredith chose to help someone who needed it. Her privilege was checked and now she sees that her situation could always be a lot worse. But if this theory holds true, then fans are in for quite the surprise.

Why That Tragic Game of Thrones Twist Has Always Been Inevitable

Feel More Relaxed With These 8 Healthy