But that’s now, after hundreds of hours of practice. In the beginning, despite dabbling with makeup from Sephora and MAC here and there, it wasn’t so easy mastering the tricks of the trade.

Creating the “illusion,” as she calls it, of a lovely bone structure or bigger lips or a smaller nose, or all the above, took time. “I’ve watched a lot of YouTube videos and adapt it to my own face. I also picked up a few tips from my drag mom Alexis Michelle – the family resemblance is strong. She was on Ru Paul’s Drag Race and has taught me a lot.”

“Drag makeup is so different from regular makeup,” said Sport. “It takes me about an hour and a half to get ready, and that part takes the longest for sure. If I want to go crazy or I’m really feeling the fantasy, I’ll give myself two hours.”

Like how your base makeup – foundation, concealer, contour, correctors – should always start as a cream before setting with powder. Or that alternating between your correct foundation shade and one two shades lighter can bring the features you want to highlight forward. How orange color correctors work wonders at canceling out dark shadows from a beard. Oh, and that eye shadow makes the best highlighter. 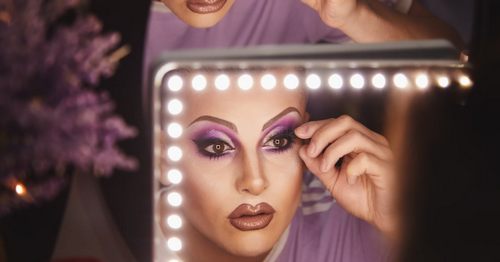 The first step, though, is shaving her entire face – including her eyebrows. “A lot of drag queens glue down their eyebrows with a medical-grade adhesive, but my skin became allergic to it and I had a rash all around my eyes,” said Sport. “The drag makeup covered it up because it’s so full coverage, but it burned, so I made the decision to shave off my eyebrows. This is my job, and it might not look good when I’m a boy all the time, but I can draw them on and look presentable when I need to. It’s not a big deal to me. I have RevitaLash, and they grow back in like three weeks.”

It’s no wonder, then, why she’s dubbed her brow pencil as the one product she goes through the quickest (“well, that and my Ben Nye Translucent Setting Powder”) – because she uses it in and out of drag. “When my boyfriend wants to go out he’ll say, ‘Put on your eyebrows, let’s go,'” she laughed.

I tried the teeth whitening device the Kardashians swear by, so did it live up to the hype?