According to Reinhart, Phan’s videos introduced her to the “glamorous” world of makeup at the age of 14, and they clearly sparked something magical. Fast-forward to the present, and the 23-year-old’s steadfast love for makeup is plastered proudly throughout her social media pages. Any longterm fan of the Riverdale and Hustlers star will talk your ears off about the impressive special-effects makeup skills she’s showcased over the past few years. 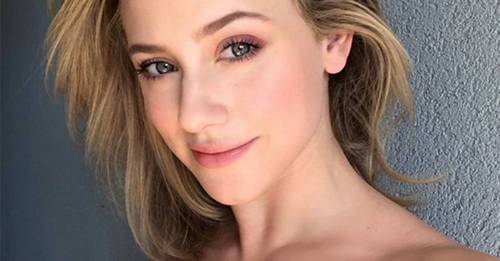 If you’re anything like Lili Reinhart, you probably spent countless hours of your teenage years sitting in front of a computer, entranced by the makeup skills of Michelle Phan, one of YouTube’s first beauty vloggers. You might’ve taken notes from her then-revelatory makeup tutorials with a pen and paper, like you were in a high-school English lecture, and saved all the money you could muster just to buy her favourite products at the local drugstore. Most nights, you fell asleep watching those videos and the advice wormed its way into your psyche, abetting an obsession that would last for years to come.

In October, Reinhart’s makeup expertise even landed her a brand ambassador gig at CoverGirl. That’s not a job you get without picking up some killer tips and products along the way, so we asked Reinhart to give us a rundown of her current favourites.

Though Phan’s older videos would’ve taught a teenage Reinhart how to pull off super-dramatic looks with statement lipsticks and elaborate eye shadow or eyeliner, the actress says she’s taken to much simpler routines in recent years. Now, a good skincare base is priority No. 1. “When I know that I’m going to have a long day of work, the night before I’ll do an exfoliation mask just to get my skin prepped, and then on the day of, I definitely use a primer,” Reinhart says. “It bothers me when people don’t use primers.”

On an average day, Reinhart cuts her makeup routine down to two products: concealer and an eyebrow pencil. “I like to use a Beautyblender or a fluffy little concealer brush [to blend concealer],” she explains. She locks it in with a dusting of loose powder if she’s on set but never lets it sit on her skin long. “I think [baking] is good for people who are trying to get that pop of highlight under their eyes. But for me, personally, I don’t think it does anything.”

As a natural cool-toned blonde, Reinhart says it’s “hard to find a good [eyebrow pencil] colour that doesn’t look weirdly warm,” so she reaches for CoverGirl’s Easy Breezy Brow Pencil in Soft Blonde almost every day. And if she’s got an extra minute or two, she picks up one last product that knocks out three steps in one: a sheer and slightly shimmery cream blush.

“I really like tapping Clean Fresh Cream Blush into my cheek and also using it as a stain on my lips,” she says. “If I’m going out, I like to also put it on my eyes a little bit.” The most flattering shade for fair skin tones or green eyes like hers, she thinks, is a baby pink called Sweet Innocence.

Because Reinhart is a self-described skincare devotee with sensitive skin, she’s also particular about what she uses to take makeup off at the end of the day. She heralds Dermalogica’s PreCleanse and Kate Somerville’s Cold Cream Moisturising Cleanser, but few products can beat the makeup-removal hack she’s been using “since forever”: plain Vaseline ointment.

“My mom has really sensitive eyes, so I grew up watching her do that,” she says, explaining that her eyes are also very prone to irritation. “If I’m washing my face and there’s mascara under my eyes, I’ll put [Vaseline] under my eyes and it wipes right off with a tissue.”

Moral of the story: There’s nothing wrong with keeping things simple – or affordable. “I’m very cheap, so I don’t like to buy things,” Reinhart laughs. “I like to make sure I know I’m going to love [a beauty product] and that it’s going to work before I actually purchase it.”

If one of TV’s fastest-rising stars can make set-ready makeup happen with a few bucks and even fewer spare minutes, so can we.

QVC sold 125,000 bottles of this popular foundation in a few hours