But one of the strongest parts of Growing is the way Schumer takes on society’s impulse to treat pregnant people in a precious way – like they’re angelic, wholesome, cutesy parodies of women.

As if we’re all having a magical time gestating a human. “I didn’t know that being pregnant could be really hard,” she says. “You bitches all lie about it.”

By all accounts, Amy Schumer has not had an easy pregnancy. The comedian has a condition called hyperemesis gravidarum, often referred to as “extreme morning sickness,” that caused her to cancel much of her tour. She gets brutally real about this – and other aspects of her pregnancy – in her new Netflix special, Growing, out now. At one point in the special, Schumer compares hyperemesis to “having food poisoning every day for the last five months.” “I throw up an Exorcist amount every day,” she jokes, before revealing she was once hospitalised after vomiting for five hours straight. This is all to say that if anyone deserves a little special treatment during their pregnancy, it’s Schumer.

She attacks the pregnant-woman trope seen in romantic comedies: a lady throws up – once! – in her office, realises she’s expecting, and is suddenly wearing overalls, painting, and cupping her bump in the next scene. The implication here: Even if you’re not an overall-wearing, crafty, lovey-dovey person, pregnancy will turn you into one. But “you’re still you,” Schumer says, pointedly. 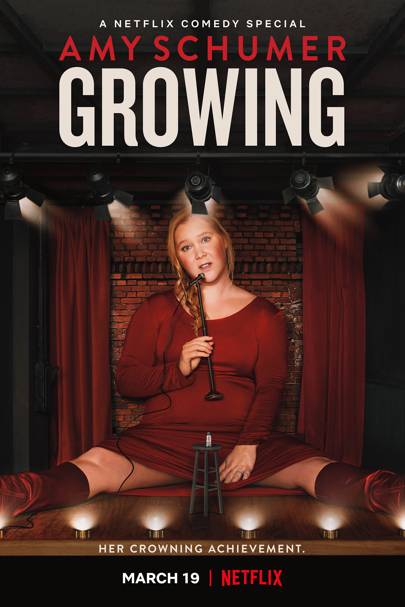 This resonated loudly with me as a new mom. I didn’t spontaneously turn into a cartoon mother once I got knocked up. Once I revealed I was pregnant, it felt like the baby was all anyone wanted to talk about – even if I didn’t want to talk about it.

Yes, to a degree this was a preview of what motherhood is like, but Schumer’s material is a reminder that our own existences shouldn’t take a backseat. Women are still important, relevant, and interesting outside of their pregnancies.

Schumer skewers this by revealing that she greets the myriad of “What are you having?” questions she fields every day with a despondent “haemorrhoids.” She screams “cock!” when asked, “What are you craving?”

“Just me and my angel,” she says in a saccharine voice after telling this anecdote, caressing her bump, almost daring the audience to admit they were expecting her to be somehow softer or sweeter as a pregnant woman. Nope. She’s still her. 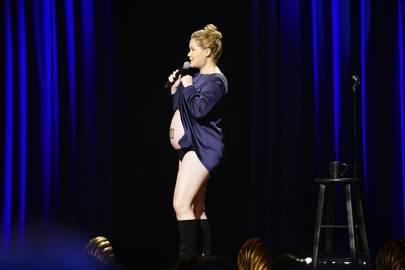 When I was pregnant, I often joked I had something called “pregnancy rage.” Instead of, say, weeping at car insurance commercials (another pregnancy trope), I felt mad a lot, particularly about the way pregnant women are infantilised by the exact stereotypes Schumer brings up. I can’t definitively say Schumer has pregnancy rage too, but she certainly felt like my kindred spirit as I watched Growing. She hates the way pregnant women always cup their bumps in photos – “it’s so obnoxious” – and doesn’t understand why people think she’s a hero for just showing up to work.

“I’m contractually obligated to be out here, guys,” she says. “I’m not like, ‘The show must go on.’ I’m like, ‘I will be sued.'” She hates women who say they enjoyed their pregnancies. She hates when people ask to see her bump, so much that she hikes her dress up at the beginning of the special and flashes it to the audience. A bump middle finger, if you will.

To be fair, pregnancy is giving Schumer a lot to hate. But even as someone who had a relatively easy and uncomplicated pregnancy, I felt so seen by her derision. Pregnancy is more present in comedy than ever before – just see Ali Wong’s two specials – but what’s particularly satisfying about watching Amy Schumer is right there in the title: She’s growing, but she’s still her. And it’s cathartic to watch.

Hailey Bieber on being blessed with good genes