Emma Raducanu’s victory in Saturday’s US Open was astounding. At only 18 years old, she became the first qualifier ever to reach and win a Grand Slam singles final. As a mixed race immigrant, with one parent Chinese and the other Romanian, she has been hailed as a multicultural success story: a testament to the diversity of a new British generation.

Yet what these proclamations seem to lose sight of is that Emma is more than just her immigration status.

That’s not to say that Raducanu’s race and position as an immigrant are completely irrelevant. Mere months ago, we witnessed a similar feverish pride in immigrant British success when the England team reached the finals of the 2021 World Cup.

Yet Britishness (and the perceived consequent right to humane treatment) were stripped from Marcus Rashford, Bukayo Saka and Jadon Sancho by some fans who deemed their identities to be transient as a result of their Blackness. After all, why shouldn’t they? In both the media and the law, the precedent has been set for individual identity and nationality to be subject to public debate. 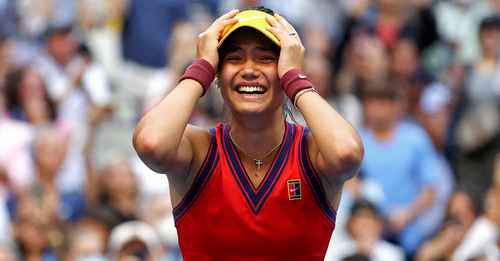 Being of an immigrant background in the UK, let alone one of colour, inevitably leaves you hanging by a thread. The message is clear: “We will celebrate your successes, but step one toe out of line and it shall be as if your Britishness never was.”

By most people’s metrics, my family’s story is probably also one of success. When my granddad first came to this country in 1979, he worked at the Ford factory in Dagenham. On his paltry, blue collar wage, he raised my mum and her siblings in an overcrowded house in East London. Nine years old when she immigrated with no English, my mum went on to be the first of her siblings to attend university, let alone such a prestigious one as LSE. Today, my older sister is a doctor, and I am a student at the University of Cambridge. I am proud of where we all are, but our achievements should not render my granddad’s immigration any more valid than it would be if we had all ended up in exactly the same house and job as him.

“When this pride in Britishness turns into people outside of immigrant communities beginning to weaponise her identity, I feel ill-at-ease. I know that their pride is conditional

As a second generation immigrant, when I see people like Raducanu succeed, I feel a lump in my throat. On one hand, I am proud to be a British immigrant. I understand her achievement not as a result of her identity, but as running parallel to it.

Yet when this pride in Britishness turns into people outside of immigrant communities beginning to weaponise her identity, I feel ill-at-ease. I know that their pride is conditional. Irrespective of intentions, whether good or bad, the immediate diversion of discourse from Raducanu’s success to her status as an immigrant feeds into the exact rhetoric which got us into this ‘hostile environment’ in the first place. In casual discussion, that might be the persistent questioning around immigrant achievements; in policy, that has become the incredibly difficult points-based immigration system, ensuring that potential UK residents live up to impossible standards.

Some decided to use Raducanu’s win to prove a point to those who have been explicitly anti-immigration, including Nigel Farage, who once said that “any normal and fair-minded person” would take issue with Romanian neighbours. But such disdain for marginalised communities has never been logical, and the rules which govern white supremacy can’t be altered through any display of non-white excellence. No matter how well Raducanu played, this is a problem larger than her or any game of tennis.

When we only hail the wins of ‘good’ immigrants, we lose out on the beauty of the unremarkable ones. From the British Bangladeshis who built a beautiful community in East London and cultivated the art of the curry house, to the residents of Liverpool’s Chinatown, housing the oldest Chinese immigrant community in Europe, ‘normal’ immigrants deserve celebration too. To reduce an immigrant to their successes is to lose sight of their basic worth as a human being. A white Brit born in this country does not have to constantly provide an apology or explanation for their very existence, stacking up reason upon reason for why they should be allowed peace; an immigrant should not have to do so either.

With a Home Secretary in favour of tight immigration rules which might not even have allowed her own parents’ entry, there is an incredibly pressing conversation to be had around immigration in this country, particularly around non-white immigrants. Putting all that pressure on one teenage athlete, especially following such a spectacular win, is also unfair. These two truths can co-exist, and to treat them otherwise is to continue to deny immigrants their own individual humanity.

Though misguided, I hope that enough of those who have connected Raducanu’s success and immigration status use their good intentions in future. When everybody has moved on and the media cycle continues, please make noise about the mistreatment of immigrants and people of colour in this country. Let’s avoid that very British pastime of sweeping uncomfortable issues under the rug.