The recent conversation around gendered pay gaps has been visible and vocal – and the most high-profile discussions tend to revolve around Hollywood and the entertainment industry as female stars speak out about what they’re paid (and what they’re not being paid).

HBO, for instance, has taken comprehensive steps to close its pay gap after conversations with Time’s Up and Reese Witherspoon, whose hit series Big Little Lies runs on the network.

The Crown‘s production companies also came under fire after it was revealed that Claire Foy, a.k.a. the titular Queen, was making much less than her co-star, Matt Smith, during the first two seasons. 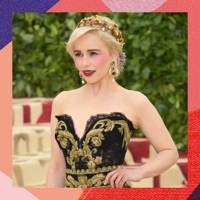 But there’s one bright spot in this murky mess of discrepancies. According to Variety, Game of Thrones star and mother of dragons Emilia Clarke says that she’s always been paid the same as her male co-stars.

“On ‘Game of Thrones,’ I have always been paid the same amount as my male co-stars,” the actress said at Cannes. “It was my first job and I was not discriminated against because I was a woman, in my paycheck.”

She called The Crown‘s wage gap “shocking” and emphasized having your team do due diligence as negotiations start is key.

“You start to dig deep and see where the pay gap is, rife in the industry. So I think it’s mainly in the beginning, just be aware of that and going, ‘Can you just check?’ You just start to fight harder for that stuff.”

Of course, the impetus should be on the production companies – those with the power over the pursestrings – to ensure that the wages are fair. But until they’re doing that job correctly – and until bosses at companies women outside Hollywood work for do their jobs correctly – the onus will be on women to do the digging and ask for what we deserve.